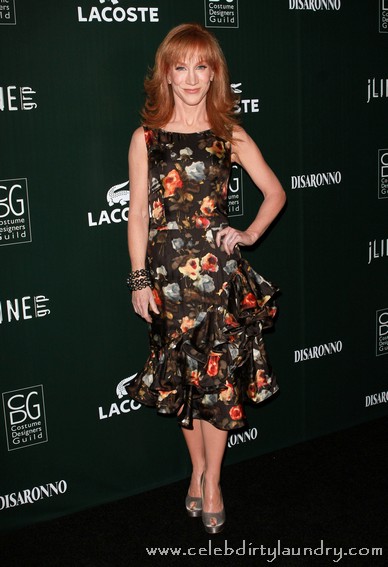 Kathy Griffin has said that she was glad Sarah Palin over-reacted to the jokes that the comedian made about her.  The My Life On The D-List star claimed that the former Alaskan governor doesn’t “get it” and should not have taken the jibes, jokes, and sarcasm so seriously.

“It was a dream come true.  I love these celebs that still don’t get it.  I rolled out the red carpet and she walked right into my act.  I added two shows to my Broadway schedule because of her,” Griffin explained.

“I laughed when she told me to come to Alaska.  Didn’t she know I have not only been to Alaska, I brought Levi Johnston and went to her house, knocked on her door and left her a note?”

Kathy  went on to joke that she would be nervous to meet Palin in person, adding:“I would wear a bullet-proof vest and underpants. She would see me as a mouse.”  “I would tell her it’s nice to meet [her], my name is Tina Fey.”

Of course to get a mega media monster like Sarah Palin to react publicly assures any comedian or critic of a much larger public.  No doubt that Sarah helped Kathy’s career more than Kathy did.