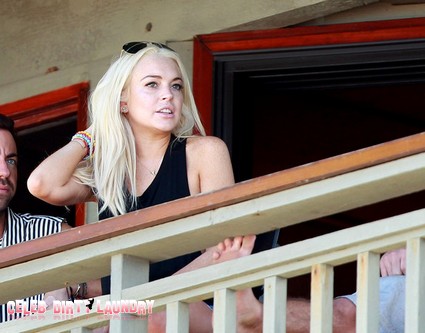 Despite receiving numerous lucrative overs to work on New Year’s Eve hosting parties Lindsay Lohan has said ‘no’ to them all. After getting into much better legal shape recently Lindsay says she won’t blow it for a wild party. Lindsay is not saying ‘no’ lightly as other stars receive New Year’s Eve compensation of over $100,000.

Kim Kardashian, for example, is set to rake in $600,000 for a New Year’s Eve appearance in Las Vegas this weekend. RadarOnline reports that Kim will make a fortune as she rings in the New Year at Tao nightclub in Vegas as part of a multi-event hosting deal. What could Kim get for a playboy shoot now?

According to TMZ:  Lindsay’s gotten a bunch of offers to host various ragers on NYE … but she’s turned down every last one.  We’re told Lindsay is desperately trying to change her party girl image … and she feels staying out of the NYE madness is a major step in the right direction.

Lohan’s decision is a costly one — some stars have raked in 6-figure checks for partying on New Year’s Eve. But we’re told Lindsay — who received high marks from the judge just earlier this month — doesn’t think a check would be worth it.  Lindsay plans to ring in 2012 with a few close friends at her home … although she may go out to dinner before the final countdown.

In any case – it is still several days before we flip the calendar to 2012 – let’s see what Lindsay actually does on the big night.