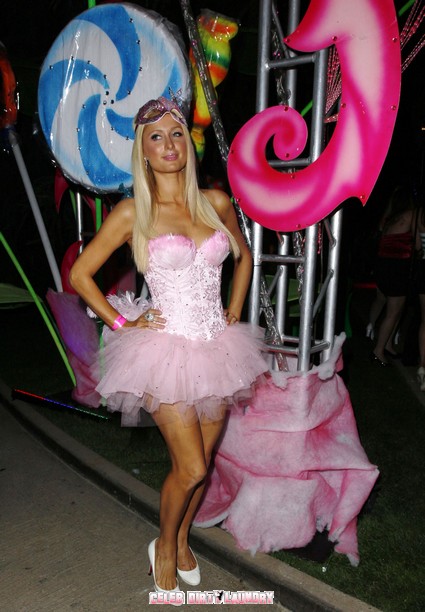 I guess Paris Hilton’s heart is not too broken after breaking up with her boyfriend Cy Waits.  Paris Hilton attended “The 6th Annual Kandyland Party” at the Playboy Mansion in Beverly Hills, CA yesterday June 25th, 2011.  Paris and Hugh Hefner got to party after both breaking up with their significant others.

The 6th Annual Kandyland party is to benefit disaster relief efforts in Japan.  Hugh attended the party in his robe as he usually does and snuggled his new 25 year old  girlfriend Anna Sophia Berglund.    He seems to have already moved on since being dumped by his ex fiancé Crystal Harris.

Paris, 30, attended in a pink tutu and a corset top and she finished it off with white high heels making her look a tad ridiculous.  Time to grow up!

Click on the thumbnails below to enlarge 6 more pics of Paris!