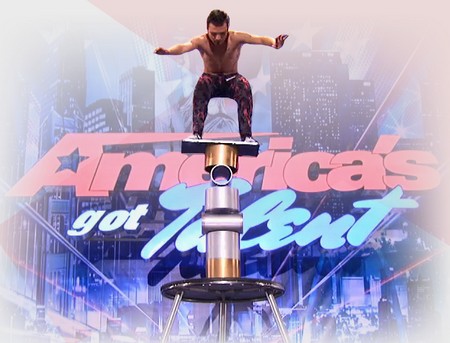 The judges said at the time of the auditions Austin did an Amazing job.  They had a great time meeting everyone. The turn out was great – a new record turnout for Texas on their first trip to the Capitol city.  Rumor has it tonight there is an act so surprising that it is going to change the competition.

On last week’s episode we saw some very entertaining acts.  The highlight of the show was the cutest little boy you have ever seen.  6 years old, Isaac Brown came out on stage, struck up a conversation with the judges, made the crowd laugh and then broke into song and dance, singing “I Want You Back” by The Jackson 5.

Howie tells him that he has the whole package. Howard tells him that there are a lot of children that come on the show are annoying, but he loves him already. Sharon says he has star quality. Three YES votes get this adorable boy off to Vegas.  If you missed the episode you can read our full and detailed recap here!

RECAP: Tonight Howie tries to “one up” it again and arrive on a bull.

First to audition in Texas today is Mariachi Band El Churo. Sharon says she really enjoyed the performance, Howie said that he was surprised to hear such a voice from a small kid and Howard says they took the roof off the place. Little Sebastian de la Cruz is off to Vegas!

Next we see an Impressionist completely fail on stage and a side show circus take the same route of failure.

Two Iranian acrobats are next to audition and they’re called Bandbaz Brothers Acrobats. Sharon tells them they were fabulous with getting their balance back. Howard said he loved the shaking, making the act much more exciting. Howie says that they are amazingly dangerous and edgy with their act. The Bandbaz Brothers Acrobats is given the pass to Vegas!

Auditioning next is Timothy Michael Poe, a war veteran and singer. Howie asks how he could sing without stuttering and tells him that he is a phenomenal talent. Sharon says he has a very rich and beautiful tone in his voice and that the song suited it very well. Howard thanks him for his service and that when he sings he doesn’t push his voice and did a really good job. Timothy got three yes’s in a row and is moving on to Vegas!

Next up to audition are two contortionists who amaze the judges and go to Vegas, a young boy come up right after who sings and plays piano earning himself a pass to Vegas as well.

Auditioning next is Lulu and she pole dances and gets an X from Sharon following Howard, but Howie does not hit his X. Howard was really skeptical if she would fall or not and says no. Sharon says she is very confident and says no. Howie says yes in support for her.

Nick then comes out and does some pole dancing himself, taking of his shirt and revealing a bikini top made of duct tape he’s wearing. So even though Lulu didn’t get through, we got to see Nick pole dance which was disturbing yet slightly awesome.

Next auditioning is man who tells stories with light and sand. His act just amazes the judges with how unique it was, giving him an obvious pass to Vegas.

Auditioning next is David Smith and he’s a human cannon ball, so the judges go outside to witness his act while it is raining and paramedics are at the site. David launches through the air and makes a great landing, being completely fine with no harm done. Howard says that he loved it and whats to see it again. Sharon says that David really surprised them. Howie said he’d love to see it again and told him yes right away. David Smith got three yes’s and is headed to Vegas!