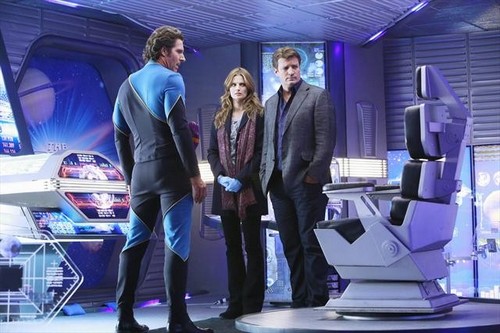 Tonight CASTLE returns to ABC with a whole new episode called “The Final Frontier.” On tonight’s show Castle and Beckett take on a murder at a Sci-Fi Covention.  Did you see last week’s premiere episode? We did and we have a full and detailed recap here for you.

On last week’s show while investigating a shocking ritualistic murder, Beckett and her team uncovered surprising evidence linking Castle to the killing. As the evidence against him mounted, loyalties were tested, and when surprising revelations come to light, Beckett began to wonder how well she really knew her new lover and partner of four years.

On tonight’s show when a body is found at a sci-fi convention, Castle and Beckett are warped into the heart of fandom — a world of egotistic celebrities, diehard costumed fans and enough drama for two galaxies.  In a Castle “shocker”, Castle bumps into Alexis at the convention and is shocked at her revealing anime outfit, it’s the sexy side of sci-fi.

Tonight’s episode is going to be great and you won’t want to miss it. So be sure to tune in for our live coverage of ABC’s Castle tonight at 10PM EST! While you wait for our recap, hit the comments and let us know what your think of Castle season 5, so far?  Hit the comments and let us know your thoughts and enjoy some pics of tonight’s episode below!

Tonight’s episode: The show begins with the “Nebula 9 Experience” and the victim that is just lying around and appears to be a part of the show, the only thing is, she’s really dead. There has been a murder at Supernova-Con and Castle has memories of attending the convention when Alexis was young, she would dress up as Princess Leia and he as Darth Vader. The victim’s name is Annabelle, she was in charge of the Nebula 9 Fan Experience.

Becket bumps into a college friend who reveals that she was a huge Nebula 9 fan back in the day.  Castle is shocked that she was such a big fan and even dressed up in costumes. Castle wants to see Becket in that costume, his dream come true.

Annabelle died from a burn, one created from high levels of radiation from a high intensity laser beam. Becket is wondering how Annabelle could have been killed by a laser beam. Castle wants to go back to the email from Annabelle’s crazy fans, perhaps one of them fashioned the laser beam to kill Annabelle with the exact weapon from Nebula 9.

Ryan and Esposito are trying to interview some of the other people at the convention and find out from one of them that Stephanie Fry was with Annabelle at 9:45pm the night she was killed and one of the last people to see her alive. Becket interviews her and asks right out why she was with Annabelle late at nine and she says that she turned down Annabelle to be a part of Nebula 9 and she goes on to say that Gabriel Winters, Captain Max, was showing up late and drunk, he’s a washed up actor.

Castle is shocked to bump into Alexis wearing a “barely there” anime costume but Becket quickly pulls him away before he embarrasses himself and Alexis.

Castle and Becket go on to interview Winters who claims he had nothing to do with Annabelle’s death. Castle discovers a laser blaster that is in Winter’s possession that could be the murder weapon.

Back at the station, Winter says that the blaster didn’t belong to him, it was just a prop that he gabbed off a table. He goes on to say that he clashed with Annabelle but they had an understanding, he then mentions that she had a boyfriend but there is no evidence that she actually had one.

Esposito was able to trace the laser blaster, Castle and Becket are going to head out and investigate.

Ryan and Esposito do some checking around about Annabelle’s supposed boyfriend and they do find out that they attended a party together and he has on a very exclusive VIP pass.

Castle and Becket don’t turn up anything but the VIP pass is the possible lead that can put them in front of Annabelle’s boyfriend.

Castle is home, Alexis is there and neither one of them wants to talk about how he caught her in the skimpy costume.

It turns out that Simon Westport is the guy that was Annabelle’s boyfriend and he bought her the laser blaster. At the part the night she was killed, Westport claims that a guy tried to kiss Annabelle and she was very upset. Westport describes the guy, it’s Davis, the guy Annabelle was doing the episodes with.

Castle and Becket interview Davis, he admits that he was at the party and he told Annabelle that night how he felt about her, but he didn’t kill her, he was half way to the masquerade ball when she was killed. She went on to say that she was gong to sell the Nebula 9 rights and the fan experience. Davis’ alibi checks out and get this, now that Annabelle is dead the rights for Nebula 9 goes to Audry.

Audry worked for years with Annabelle to get Nebula 9 back on track and Castle and Becket think she was mad enough at Annabelle for wanting to sell the rights that she could have killed her.

Castle and Becket call in the whole cast of Nebula 9 and stage the murder and little does the killer know that the laser blaster left a mark on the killer’s hand that is visible under ultraviolet light. Each person takes a turn putting their hands over the light and it turns out that Winters hand is glowing but he says that he bought the same type of gun that killed Annabelle. All of a sudden, Stephanie tries to leave the room and Becket sees the mark on her hand. Stephanie loses it and threatens to kill Captain Max, she wanted to be a real actress and Annabelle was going to stop that. Captain Max overtakes Stephanie and grabs the laser blaster from her, Becket arrests Stephanie.

Castle wants to see Becket in a Nebula 9 outfit and she agrees to do it for him and he sees the bottom first and thinks it’s sexy until she shows her face and it’s a terrifying mask.