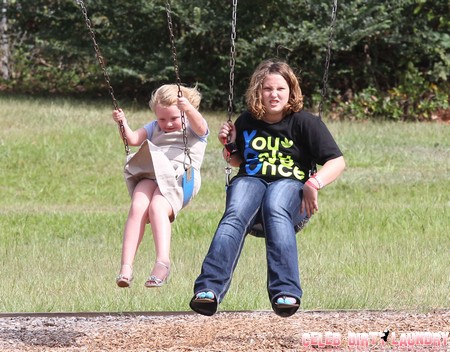 We knew it was only a matter of time before the big “Here Comes Honey Boo Boo” scandal guns erupt like the breasts of a silicone job done in Guatemala. According to the National Enquirer, a family porn scandal has “resurfaced to send shock waves through the hillbilly clan!” Come on y’all! Let’s get ready for a country ho-down! Michael Ford, the father of Alana Thompson’s half-sister, is attempting to reconnect with his daughter. He has since called Mama Boo Boo, June Shannon a “barefaced liar!” According to previous reports by the National Enquirer, Ford is a registered sex offender who was charged with sexual exploitation of a minor over the internet – a crime so despicable that not even Dr. Phil would stomach it.

The clan of Wes Craven wannabes gained considerable popularity after their appearance on the TLC hit show “Toddlers and Tiaras”. The family’s off-beat personalities scored them their own reality television show with Alana Thompson as the star of “Here Comes Honey Boo Boo”. The family has been scrutinized for their odd behavior, including a stripping stint for Honey Boo Boo at a college bar in their hometown. Therefore, it is no surprise that the latest scandal erupted as quickly and as easily as a red hot pimple on a teenager’s forehead.

According to the National Enquirer, Ford was arrested in 2005 after he contacted a 13-year-old girl on an online chat room. Unbeknownst to Ford, this 13-year-old girl was actually an undercover police officer who wanted the blood of the vile online sexual predators. Ford arranged for a place to meet for sexual intercourse and was subsequently arrested at the meeting place. He pleaded guilty to violating Georgia’s Computer Pornography and Child Exploitation Prevention Act of 1999 and served more than two years in prison.

In a faux rehabilitated fashion, Ford wrote an open letter to his estranged 15-year-old daughter, Jessica “Chubbs” Shannon. In this letter, he asked her to reconnect with him and wanted his parents to meet their granddaughter before they die. Included in the letter were the maudlin and desperate attempts at reconciliation, with tearful paragraphs of remorse such as this one: “Honey, your dad messed up, but I’ve done my time. Despite what you have been told, I’ve always tried to be with you. I’d like you to meet your grandpar­ents before they pass on. If I had the money for an attorney, I’d fight to get visitation with you, but I don’t. Your mom thinks I want to see you to get money from you, but I don’t want money – I just want to spend time with my baby girl, so you can get to know me and my family. Nothing could make me happier. I love you.”

Was this truly remorseful? Was Ford really planning on coming to terms with his past? June doesn’t think so. She spoke out about Ford’s reconciliation efforts, “He hasn’t wanted to deal with Jessica for 15 years, and all of a sudden, the show comes out and he’s father of the year.” Ford defensively responded to June’s allegations, “June’s lying. I’ve tried to be a responsible father all along.” He alleges that he has been paying child support since 2004, but wasn’t allowed anywhere near his daughter since 2005. He said, “Last November, June told me if I tried to come to the house to see Jessica, she’d have me arrested for ha­rassment!” he recalled. “I was shocked to see Jessica on television the night the show premiered, but when I tried to see her the next day, I was told, ‘If you want to see your daughter, turn the television on Wednesday nights.’ Let me tell you, it hurts.”

Do you think Ford deserves a shot at reconciliation? Do you think June is trying to protect her family from him? We’re stumped on this one, but we know you’re not, so give us your thoughts in the comments below.