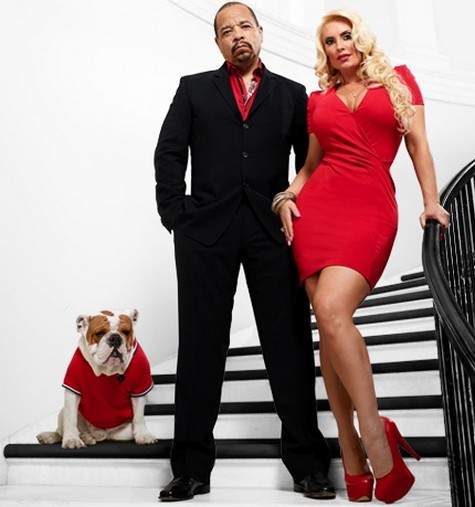 Tonight on E! is the season premiere of the third season of ICE LOVES COCO which stars rapper/filmmaker/motivational speaker and his entrepreneur wife Coco.  The duo continues to love and support each other while finding new passion in their professional and personal life.  Did you watch season 2’s finale episode?  We did and we recapped it here for you.

On season 3  necessity becomes the mother of invention when Coco decides it’s about time to stop walking her beloved bulldog Spartacus in the cold while she’s with Ice on the New York set of Law & Order: Special Victims unit.  She comes up with the idea of opening an indoor dog park called, Club Spartacus.  Also during this season Ice will go back to his true love music.  He will work on new material in the recording studio.  Ice will also try stand-up comedy this season and Coco will try her hand at being a weather girl

In the tonight’s episode, season 3 opens with Coco’s clothing line making its debut at New York’s Fashion Week.  Also construction continues on the Ice and Coco’s luxe new home, and Coco can’t understand why ice would want to delay the process by requesting a car elevator in the garage.  When Ice gently reminds his dear wife her show collection is just a important to her as his cars are to him. Coco contemplates relenting.

Tonight’s season 3 premiere is going to be another fun one of our favorite couple, which you won’t want to miss. So be sure to tune in for our live coverage of of the season 3 premiere of Ice Loves Coco – tonight at 10:00 PM EST! While you wait for our recap, hit the comments and let us know how excited you are about the new season of the Ice loves Coco.

Tonight’s episode: Maximus is eight months old and almost as big as Spartacus. It’s New York Fashion Week and it’s make or break it for Licious, Coco is nervous because there are going to be some bring designers there.

At the penthouse, Coco can’t believe they are moving in a month. Coco goes to meet with Soulgee and Sparkle, she wants to break the mold for Fashion Week.

Coco has been dealing with haters who whole career and she considers herself a fashion designer and is going to prove everyone wrong. She is going to show that she can do it in front and behind the scenes.

Coco and Ice are at the construction site for the new home, there are certain things on her list and she is frantic about it. Meanwhile, Ice wants the garage to fit his six cars that he considers his babies. The garage that he has in mind will take another four months because it has to be custom made.

Five days before the fashion show, Coco is out promoting and she is getting all glammed up for a magazine photo shoot. Coco is out with Diana, her best friend, walking the dogs in the park. Coco shares with her that she is going to do her first runway fashion show and is worried that she may not be able to do it and Diana convinces her that she will be fine.

At the penthouse, Ice is talking about his “bat cave” for his cars and she suggests a storage facility to which Ice then suggests she puts her shows in storage.

Coco is at rehearsal and she is in such a panic because she knows people are just waiting for her to screw up.

After a conversation with Coco’s sister, she tells Ice that she feels bad about fighting him over the car lifts.

It’s two hours before the fashion show, Coco arrives and nobody is completely done and she is angry, frustrated and upset. The Event Coordinator informs Coco that they can’t do a walk through because they are running behind. Ice arrives and Coco is getting made up, she tells him that she feels like she is going to puke because everything was late and she didn’t get to see the final result. Ice assures her that everything is going to be ok, he is going to check on how things are going then they are going to walk the red carpet together.

It’s time for the show, despite Coco being nervous about the show, everything goes better than she expected and the crowd is roaring. Ice gives her a big hug and Coco is crying.

Later, Ice tells Coco that he is proud of her and this proves that she can do anything that she puts her mind to.