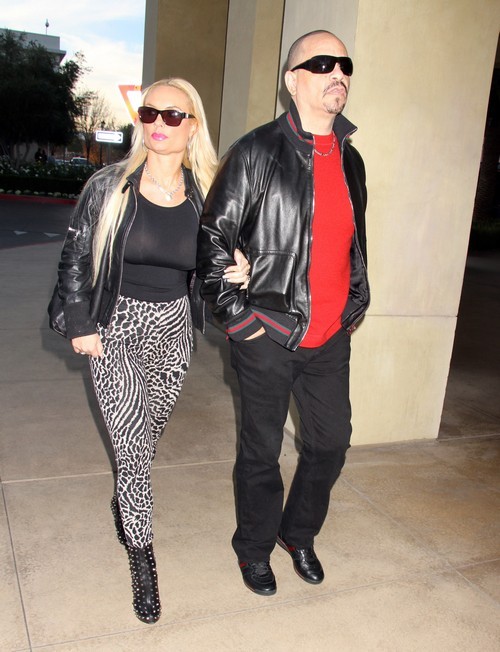 Tonight on E! is an all new episode of ICE LOVES COCO called “Baby Got Goodbye.” On tonight’s show Coco Coco comes to the realization that she is going to be away from Ice for a few months while in “Peepshow.” Will she be able to wipe away the tears and make the move?

There have been so many questions lately if love can keep Ice T and Coco together?  We were wondering if divorce was in the air after photos of Coco and rapper AP.9 surfaced. The pictures show the pair kissing, and prompted Ice-T to tweet, “Don’t get it twisted. I’m not happy about this sh*t. Most of [the photos] are disrespectful and in bad taste. She’s made me look and fee like sh*t. I say this on Twitter because there’s now ay to avoid the obvious misconduct of a married couple.”

Reportedly the two are working it out and Ice had just flown in from New York to catch CoCo’s sexy new show “Peepshow.”

On tonight’s show Coco is preparing to go to Las Vegas and she is having a lot of aches and pains.  She is also feeling guilty about leaving all at home.  Ice assures her that she is doing what she has to do for her business and she should look at it like a working vacation.  Coco does not seem convinced.

Tonight’s season 3 episode 9 is going to be another fun one of our favorite couple, which you won’t want to miss. So be sure to tune in for our live coverage of of the season 3 episode 9 of Ice Loves Coco – tonight at 10:00 PM EST! While you wait for our recap, hit the comments and let us know how you are enjoying season 3 of the Ice loves Coco, so far.

Tonight’s recap:  In this episode we see Coco beginning to juggle even more than usual. She is worried about her Club Spartacus Doggie Park and also has to start auditions for Peep Show. She has been cast as Bo Peep in the Vegas show and is a nervous wreck once she actually gets into the rehearsal room and sees the real dancers in action. It’s pretty clear that Coco hasn’t really had any dance training and she’s absolutely right when she says she’s in way over her head.

Okay I take that back. The first day she was in over her head but she seems to get the moves down pretty quick. She’s also excited because Jerry (show choreographer) is going to choreograph a whole new number around her infamous splits.

Coco is starting to feel guilty because she’s going to be leaving Ice for three months. It’s kind of sad to hear him ask her what on earth will fall apart in a few months. From the looks of those photos that just popped up from Vegas, maybe their marriage!

Ice is proud of his wife because it’ll make people see her differently and it’ll raise her star power. Coco continues multi-tasking by prepping for her doggie  red carpet event. She’s testing out everything herself, including the doggie biscuits! The first pop up dog club event seems to have been a success.

Coco finally gets her moves down and her choreographers agree that she’s ready for Vegas. She’s ready but she’s having a really hard time packing up and leaving Ice, beginning something new without him. Ice reminds her that he has her. It’s her choice to go  and he’ll hate her leaving, but he believes they’ll make it just fine. Tune in next time for the season finale.