Justin Bieber To Go Naked On Stage For A Small Fee 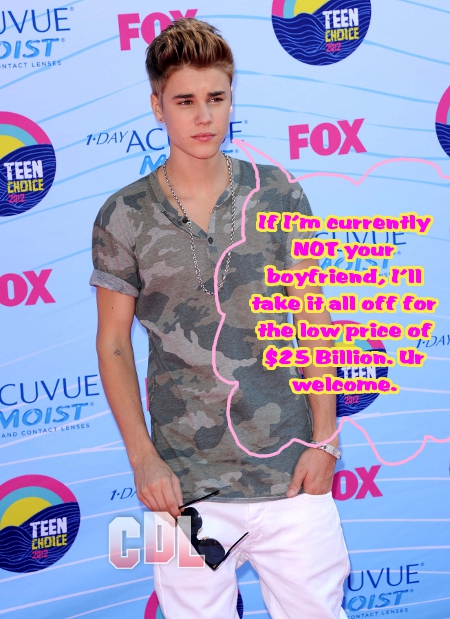 Justin Bieber has admitted he would get naked on stage — for a very small fee of course. Oh, did I say small fee? My apologies, I meant to say an astronomical fee of $25 billion! 18-year-old Bieber told BBC Radio 1’s Greg James in a recent interview exactly how much it would take to get him to go onstage naked.

I can totally understand that this seems like it will never happen. I mean, really, what person is going to pay this supposedly squeaky clean teen that much to get naked? The boyfriend of Selena Gomez is willing to drop his trousers. So what? Bieber can look like Jim Morrison did in the 1960’s? Bieber will never be anything like Morrison; sure, he has the girls going crazy after him, but let’s not forget, they are teenage girls.When Morrison was around in the 1960’s with The Doors, Morrison had a sex appeal that woman liked and wanted.

It seems that multi-millionaire celeb teenagers are still strapped for cash and, if it came down to, hey, why not show the goods to make a little extra spending money? God help me if I hear that someone was willing to give him that money — I would make sure I never had to see it. EVER. Seems almost like child pornography — despite him being 18 years old. My eyes would never be the same after witnessing that. Would you want to see Justin Bieber naked?