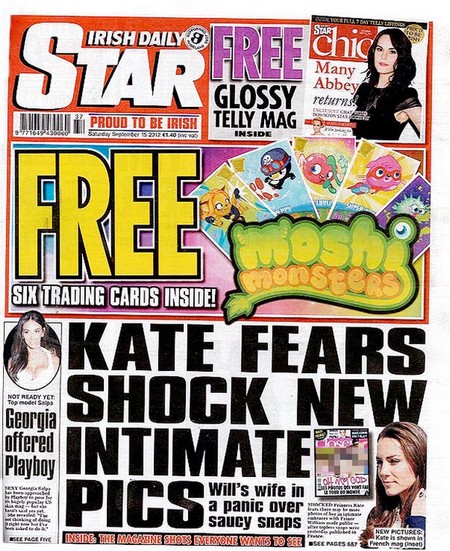 We all remember that fateful day when the future Queen of England, Kate Middleton, was photographed topless at the Chateau d’Autet in France. The French magazine Closer exclusively ran the images of the Duchess of Cambridge’s nip-nips, and many other UK-based tabloid newspapers followed suit to blow the scandal up. In an unprecedented fight for readership, the Irish Daily Star decided to follow the road less traveled and reran the controversial images of the beloved Kate. Unfortunately, this decision cost editor Michael O’ Kane dearly.

After an internal investigation was carried out, O’ Kane was suspended from his position in September. However, the dimwitted editor decided to bow out today and officially resigned as editor of the Irish Daily Star due to pressure from shareholders. Richard Desmond, whose Northern and Shell group co-owns the newspaper, threatened to shut down the tabloid in September. In a written statement, the newspaper said, “As a result of the publication on 15 September 2012, issues arose with the shareholds of Independent Star Limited. Having considered those issues in tandem with Mr. O’ Kane, it is Mr. O’ Kane’s decision to resign as editor of the Irish Daily Star, effective immediately.”

Independent News and Media, the other co-owner parent compant, said in another statement, “Mr. O’ Kane acted at all times in a highly professional and appropriate manner and in the best interests of the newspaper. Furthermore, he followed all editorial policies and guidelines.”

According to sources close to the situation, shareholders worked to secure the future of the newspaper after the Kate Middleton scandal. Their decision, however, will not affect the status of the 25-year-old publication, plus none of the 120 employees will be directly affected by O’ Kane’s resignation. The newspaper’s internal investigation is still ongoing, though.

SEE The Photos of Kate Topless and Botomless Right Here

Kate’s topless fiasco was seen by up to seven million Brits, but the impact of the fracas clearly had far-reaching effects. Unfortunately, O’ Kane drew the shortest straw and had to pay for his seemingly irresponsible actions. What do you think, though? Do you think the images should have been removed from circulation? Do you think the royal family overreacted? Let us know your thoughts in the comments below.