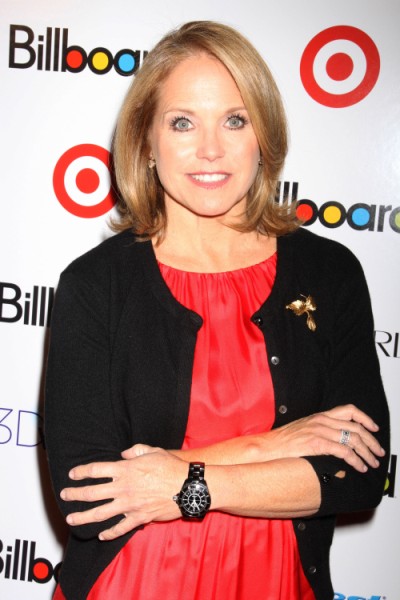 Katie Couric will drop a personal bomb today when she announces she suffered from bulimilia for six years. According to the Page Six, Couric reveals her secret on her new talk show as she’s interviewing X Factor judge, Demi Lovato, who also has dealt with her share of body issues.

Katie says: “I wrestled with bulimia all through college and for two years after that. And I know this rigidity, this feeling that if you eat one thing that’s wrong, you’re full of self-loathing and then you punish yourself, whether it’s one cookie or a stick of gum that isn’t sugarless, that I would sometimes beat myself up for that. How do you have a healthy relationship with food, and say, ‘You know what, I can have one cookie and it’s OK?’ That is such a huge thing for people who wrestle with this.”

How interesting this news is coming out right after Katie took all those hits for calling Kate Middleton too skinny. Does this new info put those comments into a different perspective now? What does that mean when a person with a past eating disorder says you’re too skinny? Was she unconsciously saying she thought Kate Middleton has an eating disorder? I’m not trying to put words in her mouth. It’s just my initial thoughts. Tell me yours!

Regardless, I’m so excited Katie Couric had the guts to tell people about her eating disorder. I’ll try to forget that she has a new show and desperately wants ratings. It’s so important that young women know that they’re not alone. Yes, I’m just as pleased when actresses come out and say they’ve battled these diseases but Couric’s admission is different. Couric isn’t a model. She’s a professional and her reveal gives eating disorders a new face. Bulimia is not just about 13-year-old girls who want to look like Kate Middleton. It even affects older women who appear to be self-confident and intelligent and on the right track in life and those women tend to stay quiet because of the shame. People who aren’t familiar with eating disorders think grown women should know better but that’s not how these diseases work.

Page Six goes on to say Couric eventually beat the eating disorder with the help of a therapist and personal research into the lasting medical damage purging does to the body. Hopefully her story can help others do the same. But I have to ask. Do you think the timing of the Katie Couric bulimia story is suspect? Is she using her addiction to get ratings or does it not even matter since she’s helping people in the end?