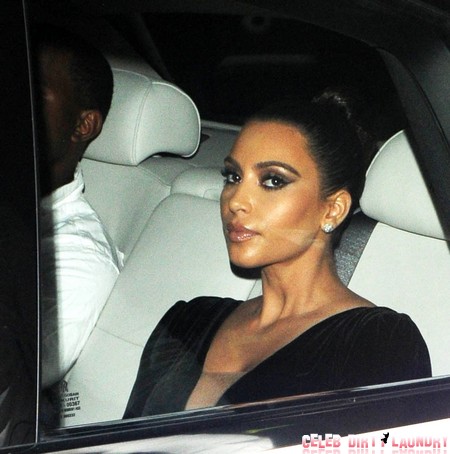 The jealous bitch of the west, Kim Kardashian, is once again in the news for her squalid spotlight hogging. The cretin of reality television is “jealous of her sisters”. Right, we’ve known this for quite some time now, so why bring it up? Well, dear Celeb Dirty Laundry readers, we haven’t yet covered the collateral damage of Khloe Kardashian’s revolting performance on X-Factor USA, so we thought we would stir the witches’ brew and see what we come up with. Nah, we’re jerking the chain of your long drop – Life & Style already stirred that pot for us!

According to the latest issue of the magazine, “[Kim] has become deeply envious [of Khloe’s] new X-Factor hosting gig. Kim and Khloe have been fighting lately because Kim is extremely jealous of Khloe’s career. Kim feels like Khloe has become the breakout star of the family, and she hates it.” Well, we know that Khloe’s nip-nips were looking to break out from that uglier than sin blue blouse she was wearing, but the breakout star of the family? We don’t think so. Kim brought fame and fortune to the tribe of lunatics, so Khloe is merely riding off of that fame. According to an insider, “Kim is very critical of her performance on X-Factor.” Kim wouldn’t be the only one, because, you know, Khloe was so, so bad during her hosting of the first live show, that we were forced to superglue our eyelids and spank our ears to drown out her monotonous and beastly voice.

Khloe isn’t the only sister who has to endure Kim’s fame whoring wrath, because according to an insider, Kourtney Kardashian is also a victim of the throat punching, spotlight hogging Kim Kartrashian. The insider adds, “[Kim] dreamed of having a baby by the time she turned 30, but she’s seen that milestone birthday pass her by – while Kourtney has two adorable children.” Well, well, Kim, it’s not Kourtney’s fault that she is able to stick to a partner for longer than 72 days! It’s also not Kourtney’s fault that she was virile enough to spawn two fat babies with that decrepit Scott Disick (remove the “I” and the “S” to get the full effect of how much we despise that man.) Kim is also envious of Kourtney’s post-baby body, according to a friend.

Now, now, go play with your junk in the trunk, Kim, and let your sisters have their moment in the spotlight. God knows, you’ve already had more than enough time to cement yourself as a fame whoring Kardashian, especially after that sex tape was released… Oh, did we hit a soft spot? We’re done spitting vapid responses at Kim Kardashian’s meaningless existence. Ding dong, the witch is gone!