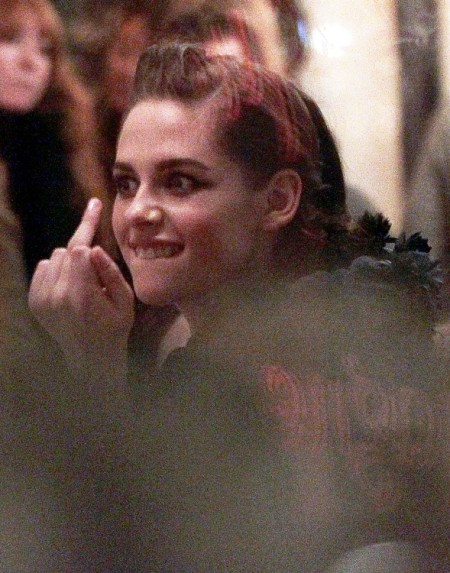 There’s nothing like a good scandal to get the people’s attention and, in Kristen Stewart’s case, it was the right people. Kristen’s finally been chosen for the lead role in an indie adaptation of William Styron’s 1951 novel, Lie Down In Darkness.

Kristen jockied hard for this role and was even up against heavy-hitter and critical darling Jennifer Lawrence to play the beautiful but damaged Peyton Loftis who is the object of her father’s incestuous sexual desires. Earlier this year Kristen told UK’s Elle magazine, “I want to play Peyton more than anything I can possibly taste or touch in my life. I want to play her so bad. She’s in love with him. I mean, I think she’s in love with him. It’s not his fault. They’re the most f***ed-up family.”

Vulture reports that Lie Down In Darkness has been in development for years so producers are not sure when production will start but the fact they cast the lead is a good sign it would happen sooner rather than later. This news couldn’t come at a better time for Kristen. Robert Pattinson’s fans have been threatening a boycott of her films ever since she broke their dreamboat’s heart and some Hollywood insiders voiced concern over whether Kristin’s career was over before it could begin post-Twilight. Well, we have our answer. And really, let Rob’s fans boycott Darkness. They aren’t the target audience anyway so Kristen dodged a bullet on that one. She should probably stay away from romantic comedies for awhile just to be on the safe side though.

One career disaster she might not be able to dodge is working with her Snow White and the Huntsman director (and scandal partner) Rupert Sanders again. Vulture also reveals that the SWATH sequel is still a go with Kristen and Rupert at the helm. Claude Brodesser-Akner wrote:

A Universal source insists that “nothing has changed and we are still looking at sequel options that would include Rupert directing.” Calls to David Koepp were not returned, but as one agency insider noted, it would be highly irregular for a screenwriter of Koepp’s renown to continue work on a project that didn’t have a director attached to oversee its progress to the screen, lending credence to the idea that Sanders remains the intended director. Agency sources say that Universal hasn’t yet sought any other candidates to replace Sanders.

Now that’s the most uncomfortable thing I’ve ever heard. Rupert’s wife, Liberty Ross, isn’t so keen about the director and star reuniting (that’s putting it mildly) so I don’t see how this can happen. I’m not sure if contracts have been signed or what, but if someone was going to get booted, it would be Rupert. You can’t replace Snow White. This isn’t a Twilight film. There are standards. So we’ll have to wait and see on that. I just can’t see it working. If it did though, I would hate to be Chris Hemsworth because those wouldn’t be the most optimal working conditions, but I would LOVE to be an extra to watch it all go down!

So to recap – Kristen Stewart’s career is full speed ahead; her love life is still up in the air. If I were Robert Pattinson, I’d be hoping the same happened to me. If the scandal is working for Kristen, it has to work for Rob. The world is just not a fair place if Kristen Stewart breaks Rob’s heart and steals his thunder.