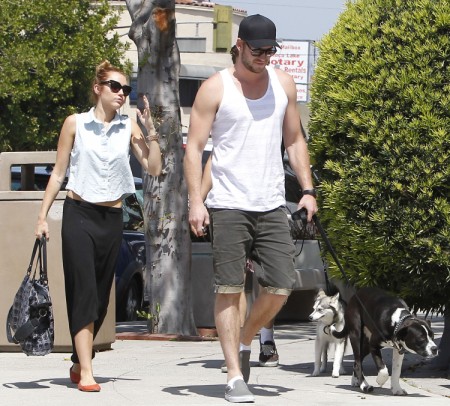 More news continues to trickle in over the engagement between Miley Cyrus and Liam Hemsworth and it seems the Disney star gave the Hunger Games hottie an ultimatum that if he didn’t propose to her, she was going to leave him.

That’s a hell of a loving, trusting way to start a marriage for life, don’t you think?

Hollywoodlife.com revealed that Miley’s been so insecure over her slumpy career and their relationship that she wanted Liam to put a ring on it and declare he’s in it for the long haul. “Miley is feeling insecure about her career right now and about her relationship. Liam’s career is sky-rocketing and Miley is afraid that he will eventually dump her, so she gave him an ultimatum: ‘Marry me or I will dump you,'” a source told HollywoodLife.com. “Miley has so many issues to work out right now and getting married is just a major distraction. She has absolutely no direction from her parents… they just want Liam to take care of Miley, so they don’t have to.”

Geez, what year are we in? I thought Miley had enough money to take care of herself for a few lifetimes. Obviously, the source means Miley’s parents want Liam to take care of her emotionally. I’m sure she’s no picnic to deal with, especially with her career in the shape that it’s in, but still… I never though Miley was this desperate.

I could totally see a 19-year-old thinking marriage would keep a dude though. I’ve been spouting for awhile that all those pilates and cutting rumors have been in response to Liam’s meteoric rise to celebrity. Liam is probably one of the most stabilizing forces in her life right now and she wants to make sure it stays that way. And Miley’s not dumb. She grew up in this business. She knows two stars together are greater than the sum of their parts. Perhaps Liam’s shine would rub off on her. It helps Jessica Biel that’s for sure.

In the meantime, we know Miley’s blissfully happy. She’s tweeting up a storm about being in “heaven”. I genuinely think this is a true love match and that’s nice and it’s sweet but it won’t last – ask Robert Pattinson and Kristen Stewart. That lovey, dovey stage wears off and then you’re back to living with your insecurites again. Hopefully Miley can find what will make her happy in the long run. She needs to realize it can only be her – not someone else –  who can sustain that happiness.

Is Miley rushing in to this marriage to keep Liam or do you genuinely think she’s ready to be a child bride?