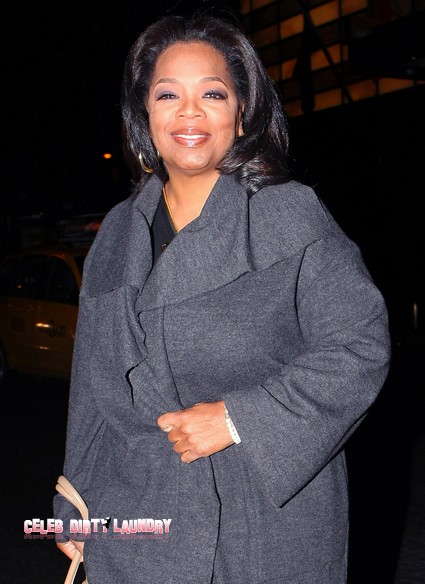 We have the sneak peak right here of the tasteless interviews Oprah conducted with Whitney Houston’s family in her attempt to capitalize upon the singer’s tragic death.  Oprah Winfrey has interviewed everyone she could get her talons on who was close to Whitney for her ‘Oprah Interviews Whitney Houston’s Family – Oprah’s Next Chapter’ on OWN this weekend.

Since Whitney hated Oprah, as we revealed right here on Celeb Dirty Laundry, it is absolutely disgusting to see her money-hungry family flock to Oprah, the vulture, to talk about Whitney so soon after her death – which is now being reported as a murder.

Oprah Winfrey has always been ready to capitalize on tragedy for her own gain but this interview has got to be her low point.  Bobbi Kristina is vulnerable and has terrible substance abuse issues of her own.  Bribing her to appear on TV in an interview about her poor dead mother makes me disgusted with both Oprah and Bobbi Kristina – I mean poor Whitney is barely in the grave and they are out there capitalizing on the tragedy.  What makes it even worse is how Whitney felt about Oprah.

According To author Kevin Ammons: Whitney thought Oprah was ‘a sell-out’ who fawned ‘all over the white guests, but disses the black guests,’ adding that Whitney knew “Oprah would pry into her relationship with her galpal and try to put her on the spot.”

It looks like Oprah has one-half of Whitney’s family lined up to do the show.  What are these people thinking?  Are they that desperate for cash and publicity?  Will they discuss Whitney’s lingering resentment for her mother, Cissy Houston, for breaking up her lesbian relationship with her first female lover?  Whatever goes down during the interview, the entire event is an insult to Whitney and all those who loved her.

What do you think of this Oprah interview?  Let us know in the comments below.