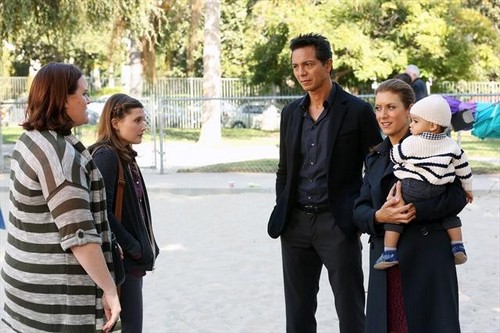 Tonight on ABC a whole new episode of  PRIVATE PRACTICE airs called “Apron Strings.”  If you have never watched the show before   Private Practice is the story of a team of gifted doctors working together on difficult cases, with patients whose medical needs often pose moral and ethical dilemmas. Together they work to change the lives of their patients for the better, as they look to one another for friendship and love.

On tonight’s show a reality show in this Addison-centric episode, her role as a parent is challenged when Henry’s biological mother reappears and asks to be more involved in her young son’s life. Meanwhile Addison reconnects with her mentor, who shares a very painful secret.

Tonight’s episode looks like it is going to be great and you won’t want to miss it, so be sure to tune in for our live coverage of ABC’s Private Practice at 10:00 PM EST! While you wait for our recap hit the comments and let us know what you think of season 7 of Private Practice, so far?

Tonight’s recap: Tonight’s episode begins with Addison and Jake’s nerve wracking visit with Henry’s birth mother, Judy. This is the first time in 8 months that she has taken an interest in the baby and the whole situation is making Addison very nervous. Judy concedes that Henry obviously is in the most capable hands and has everything he needs, but she still wants to see him again the next day.  She explains that she has walked around feeling like she was forgetting something until now. Now after seeing Henry the feeling is gone.

As Addison is trying to deal with her sons birth mother her former mentor, Dr. Shepard decides to make a few bedside confessions. She tells Addison that when she was 15 she delivered a baby herself that was taken away.  On the heels of that talk Addison is served with paperwork. An ex patient named Shawn is suing her for malpractice. Apparently 8 years ago Addison advised the woman that the baby she was carrying had Spina Bifida and the woman ignored the warning. Now she is miserable and blames Addison for having to care for a special needs kid.

Addison and Jake take Henry to the park where they are scheduled to meet Judy. What they don’t realize is that she’s decided to bring her mom Donna along. Donna never even knew that Judy was pregnant and is crushed to meet the grandson that will never truly be part of her family. Addison is ping ponging from trouble at home to trouble with the lawsuit. Jake keeps trying to reassure her that she’s done nothing wrong but she’s not believing it.

As Judy shows up at Addison’s office she finally loses it and tells her that she won’t be harassed by her at every turn. Judy explains that she was there to tell her she had to cut ties because it all hurt too much.

Shawn is really vindictive towards Addison at a sit down meeting. She blames her for ruining her life and tells her that she wishes her daughter was never born.  Meanwhile Shepard tells Addison about how you get to hold your baby for 30 minutes before leaving a maternity home. Her mother came to get her before she had the chance to hold her baby. She says after your mother calls you a whore nothing else hurts.

Addison sits down with Vivian and helps her to draft a letter to her family. She wants to come clean about everything, and also writes directly to the child that she gave up. She then asks Addison to find her daughter if possible after she dies and to give her the letter that she wrote. Addison agrees and then heads to the diner where Judy works. She gives her a necklace and asks her not to stop seeing Henry. She has a permanent place in his life and after listening to Vivian, Addison now realizes just how important it really is.

Addison also decides to settle the lawsuit. Shawn’s daughter needs to be taken care of, that’s what the money will help with so she’s willing to hand it over. Addison then catches a flight to visit Vivian’s daughter. She wishes that Vivian was still alive so that she could tell her about her daughters’ full life. She returns home and tells Jake that he is the last man that she ever wants to confess her love to. Tonite’s episode ends with her asking him to marry her!