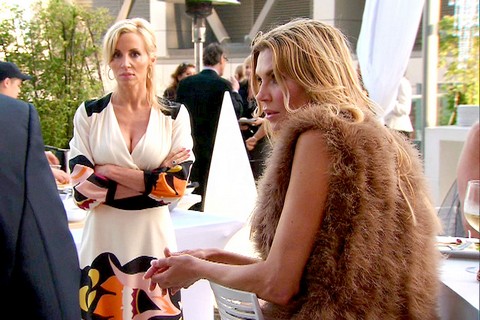 Paul Nassif Calls Brandi Glanville A Bitch After She Reveals Personal Information About Adrienne Maloof! Tonight, the new episode of The Real Bitches of Beverly Hills aka The Real Housewives of Beverly Hills, will be baking drama cookies and affairs when Brandi Glanville fears she might bump into the waitress who had an affair with her ex-husband, Eddie Cibrian – the one who cheated on her with LeAnn Rimes – at Lisa Vanderpump’s food tasting event. Glanville then diverts everyone’s attention away from the awkward meeting by revealing “personal information” about Paul Nassif and Adrienne Maloof. (If you’ve lost us halfway through this paragraph, you shouldn’t be watching RHOBH)

Brandi first joined the reality television cast of dimwits in season two of the show, when she was introduced as a spin-off “character” called a “Friend of the Housewives.” However, due to her bitchin’ ways, Glanville was soon promoted to a series regular. She replaced Camille Grammer at the beginning of the third season and carved out her own niche and fan bloc in the campy and manufactured reality series. Glanville is most famous for her ex-husband’s affair with country singer and actress LeAnn Rimes and many have asserted that Glanville only gained leverage in the reality television industry through this heavily publicized affair. She has been a polarizing figure on the popular show, mostly using her bitchiness and conniving attitude to cement herself as a true Housewife from Hell.

During the second part of tonight’s episode, Kim Richards will tell Adrienne what Brandi revealed to them, which will not only result in a very, very pissed off Paul Nassif, but will also result in him calling Brandi a bitch to her face. The resulting fallout from this spanner-in-the-relationship works will see the Housewives fighting like a gaggle of prostitutes.  In the words of our very own fire starter, Glanville, “Money doesn’t give you class, it just gives you more money.”

Will you be tuning in tonight at 9/8c on Bravo to watch the drama go down? Are you a fan of the show? Let us know your thoughts in the comments below.