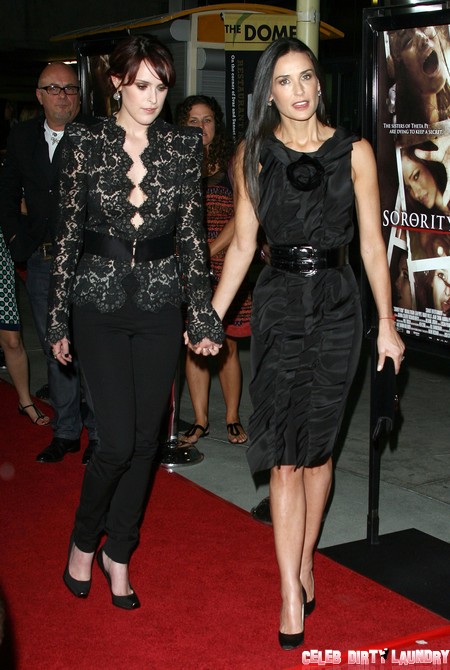 They say like mother, like daughter, but let’s hope that’s not the case with Rumer Willis, who’s rumored to be wildly out of control and headed for rehab on orders of Demi Moore! According to Star magazine, Rumer has a drinking problem and was “photographed guzzling a bottle of champagne while partying with pals in Cancun” and back in L.A. was “sucking down mixed vodka drinks.”

Last I checked, Rumer is a 24 years old woman and legally entitled to have a drink if she wants one. She’s never been arrested and never had a DUI. Not that she’s squeaky clean by any means. Last year, she was in the car along with Zac Efron when their pal Nickelodeon star Ryan Rottman got a DUI. And when she was just 18, Rumer was on hand when a friend was arrested for marijuana possession.

Star’s source – alleged to be a friend of the family said, “Rumer’s partying is getting so out of control, Demi and other loved ones are very concerned that she could reach the point where she needs help, just like her mom did.” The source added, “Her life basically consists of sleeping, then going out to hang and drink in bars and clubs, where she’s happiest.”

This sounds like a load of BS to me, but who knows. Having been off the rails so many times herself, perhaps Demi can spot a train wreck from miles away. But still, Rumer’s not the wild child spawned by Demi and Bruce Willis – that would be her little sis Scout Willis.

If you recall, underage Scout was busted with a fake ID out and about in New York City drinking and partying. Is she headed down the same path as her mom? She served two days of community service for the offense, but was seen out and about drinking again not long after. Even so, she’s nowhere near the level of crazy her mom seems to consider normal.

Remember, Rumer was on-hand when her mom was doing whip-its – the dangerous inhalant fad – and had to be revived and hospitalized. They were partying together with other decades-younger kids her decaying mom seems keen on hanging out with…

Demi’s most recent stint in rehab – for anorexia and prescription pill abuse – is not her first dance with drug addiction. Back in the 1980s, when Demi was more than a botox’d walking skeleton, she developed quite a nose powder problem. While filming St. Elmo’s Fire, her on-set drug use became such a problem that director Joel Schumacher insisted she do a stint in rehab.

If Demi was my mom, a bottle of champagne and some vodka drinks would not be enough if I had to deal with her Red Bull guzzling, Adderall chomping and ongoing refusal to let go of Ashton who’s clearly moved on to younger and saner Mila Kunis.

I certainly hope Rumer hasn’t developed a drinking problem, but she seems to be doing pretty well considering the stress of dealing with her erratic parent.