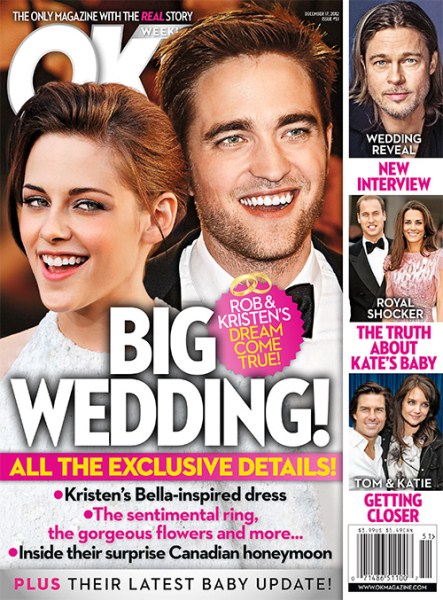 The Kristin Stewart – Robert Pattinson post-cheating reconciliation must be going smashingly well because OK! Magazine is reporting that a Twilight wedding is in the works! Has the Trampire swapped mooning over her Snow White and the Huntsmen director Rupert Sanders for honeymoon plans?

OK! quotes an insider that says, Rob and Kristin “are set to make it permanent — and legal” but says the duo are undecided on local. The source says, “They’re split between doing it in England or somewhere totally remote and tropical.”

Hmm. If I was planning their wedding, I’d be torn between a re-enactment of their Twilight nuptials, complete with hot werewolves and sexy vampires in attendance and their tropical honeymoon digs. Getting married at a remote beach resort would have them ready to rip up pillows and break headboards Breaking Dawn Part One style.

Kristin’s proven she can rock any style of gown she chooses, but I have to hope that she opts to wear her ever-present chucks underneath – maybe Converse can style her some in bridal white with some sequins. And speaking of white, she can’t be thinking of going for the virgin bride look, especially not after every magazine in the world caught her steaming up car windows with her married director lover this summer.

I’m optimistic about Rob and Kristin wedding plans – she seems fully committed to reviving their relationship (or more realistically, repairing her battered reputation and career) and he seems dumb enough to believe she’s really into him and marry her. I’ll admit the man is pretty – if he never spoke, he’d be perfect – but when he does, he comes off as a none too bright goofball…

But their reconciliation looks semi-solid and Pattinson may be hoping getting Stewart to the altar will lock their relationship down for good. They seem cuddly in photos at various Twilight premieres, whispering and kissing and there have been photos of them traveling to visit his family in London over the Thanksgiving holiday and out at clubs and concerts with friends, so all looks better than can be expected.

Prior to their brief split over Kristin’s affair with Sanders, Rob was rumored to be ready to pop the question, so this could be the real deal people! You can see at a glance that Kristin’s a non-traditional gal, so Rob needs to think outside of the Tiffany and Neil Lane box when it comes to picking out a ring for her.

I’m sure wherever they decide to wed, it will be something offbeat rather than grandiose. My guess is the guest list will be intimate and will NOT include Rupert Sanders! I don’t foresee quickie Vegas nuptials, I think Rob will want a proper wedding.

My other prediction is that Kristin may have to skip champagne at the wedding, because in addition to wedding talk, there’s baby talk. She wants Rob to know she’s in this for good and nothing says long haul like matrimony and pregnancy.