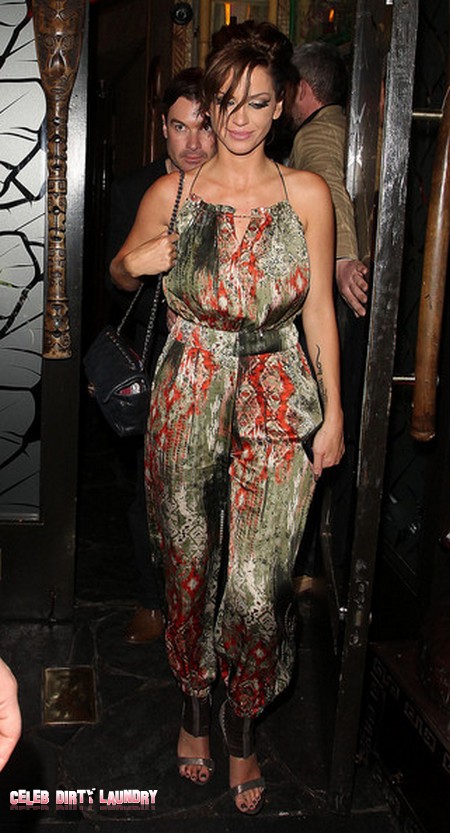 Sarah Harding now claims that Theo De Vries smeared blood all over her face during their holiday battle. It is apparent that Sarah is trying to make herself look like the victim in what was a fight in which she was more likely the aggressor. As Celeb Dirty Laundry reported recently, Sarah turned into a rabid animal and practically destroyed poor Theo in their brawl.

The Girls Aloud singer has spilled about the violent argument with Theo in an attempt to win sympathy – and claims he bit her ear and dragged her across the floor during a drunken rage on New Year’s Day – during their romantic getaway to Innsbruck, Austria. Sarah claims she was left her with a bandaged arm and bruises.

Theo on the other hand was quoted as complaining: “She threw an ashtray at my head, hitting my eye. She gave me a bloody nose. Don’t forget that she is a very good kick-boxer. She has done a lot of kick-boxing in the past. I have a big black eye. Sarah bit me on my leg and yesterday I went to the hospital to get an injection. It’s very dangerous, I have a big scar on my leg now with five teeth marks.”

Sarah reports her side of it: “I have a black eye and bruising. He had me by the neck, on the floor, and I kicked him to get him off me.”

“He grabbed me by my hair – throwing my head on the floor. While he had me by the hair, he was pulling me across the floor. He was dragging me around.”

“He was smacking my head on the floor. He bit my ear. And when I kicked him to try and get him off me, I got his nose and he was bleeding. He smeared the blood all over my face so it was all over my clothes. “

“I’ve got bruises on my bum. Bruises on my legs. The damage to my arm is probably the worst. This is where they bandaged me in hospital as they thought I might have fractured it.”

Sarah – who ended her romance with DJ Tom Crane in November – met Theo in rehab in Cape Town, South Africa, where she was treated for alcoholism and depression.

Sarah claims Theo – who was being treated for addictions to alcohol and crack cocaine – “goaded” her about being a “B-class singer” and a “f***ing alcoholic.”

In an interview with The Sun, Sarah – who admits she’d had a gin and tonic but was not intoxicated – added: “We met in rehab and I was at a real low in my life. We got on really well and he was a completely different person when we were in rehab.

“We just decided to give it a go. When we came back to London, things just didn’t seem to be the same … During the row he said, ‘You’re nothing but a B-class singer. You are just a f***ing alcoholic. You have got no friends.”

“He was really, really horrible. Any insecurities I had, he used them against me. He was goading me. The abuse carried on and on and on till I’d had enough. He got so horrible I threw a coffee cup at him. It missed.”

So Sarah was drinking and started the fight – this is by her own admission. Once again we see that rehab often proves useless.