The Bachelor Season 16 Week 7 – The Group Heads To Belize!! (SPOILERS) 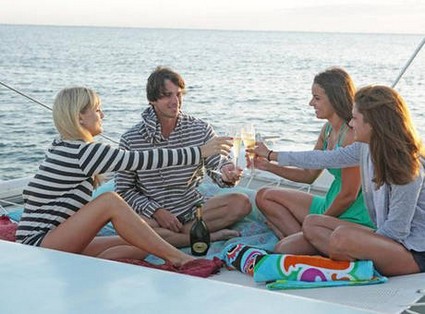 Hometown Dates Are Nearing, And Feelings Are Growing – Here’s The Down-Lo For Next’s Weeks Bachelor Where The Group Heads To Belize!!  Lawd have mercy – things are getting spicy in the land of Bachelor Ben and his luscious remaining ladies!!! Never in a million years would I have thought to find myself covering any Bachelor gossip, but be it as it may – it’s become a (shameful) guilty Monday night pleasure of mine. Make fun all you want, but it’s makes Mondays just a little bit better.

So after last night’s dramatic episode where Ben said goodbye to Casey, Blakely, and Jamie (I’m still cringing and feeling deeply uncomfortable while remembering her ‘kissing’ lesson…she’s NEVER going to live that one down) in Panama – we were given a little insight into next week’s epic shenanigan’s. Yes, I sure did say epic.

The gang merrily head to Belize – just to switch up the beaches and bikinis. Let’s pray for no more loin cloths, I just can’t handle that again. So in the preview, the 6 remaining women are eager to nab a one-on-one date with Ben in hopes of getting the opportunity to partake in the following week’s hometown dates. Pressure is high, as only one rose is available to give out. I wonder what level Courtney will stoop to to snatch up those petals? Well, it might not be looking good for model/skinny dipper/horrendous human being Courtney. But first things first, let’s not get ahead of ourselves.

Ben’s first date was with Lindzi where he helped her overcome her fears by jumping out of a helicopter together into Belize’s famous Great Blue Hole. Just another typical date, been there done that. Alas, Ben soothes her fear of heights and sparks fly. So the story goes. I like Lindzi and I think she’ll make it to the final three for sure.

Ben’s next individual date is with Emily, who as much as it was a surprise to see him ‘keep’ her, the two seem to have pretty good chemistry. On their date they strolled through the town on the island of Caye Caulker where they rode bicycles, played basketball with locals, and went diving for lobster. Amazing, as usual. Whatever will these people do in real life? They seem to hit it off, but will it be enough to get a rose and meet Ben’s family?

(Evil) Courtney goes on the last one-on-one date where her and Ben go on a romantic picnic among ancient Mayan ruins. Despite her (fake) charm, it appears that Ben is becoming a little skeptical – especially after Courtney expresses her reluctance about taking him home to her family. Is this not what she wanted? Oh wait, it’s just a competition for Courtney. As much as I hate her, good god do I want to meet the folks who brought her up. Ben’s new found feelings about Courtney are also tainted after two of the girls express their feelings about who and how Courtney really is. Cannot wait for these details.

The group dates begins with Ben waking up the remaining 3; Kacie B, Nicki, and Rachel – where he takes them on a date to swim with sharks. Now we’re talking! Both Kacie (my FAVORITE) and Nicki tell Ben they are falling in love with him – and it’s pretty obvy that they are the ones to tell Ben about Courtney’s devious ways.

What happens at the end is still a mystery, as when the 3 women are hoping to have the last word and get a rose from Ben guaranteeing them a hometown visit, Ben cancels the cocktail party. My guess is it’s because of his confusing thoughts about Courtney and what the girls have said to him.

Seriously Ben, if you can’t see the type of girl that she is, then maybe you deserve her. She’ll never stick around long enough to say boo either way. She’s a model after all. Gawd…

My predictions for next week? Rachel and Nicki are out, final four is Emily, Courtney, Kacie B, and Lindzi. Who wants to make bets? Stay tuned for next Monday, it’s going to be a juicy one!