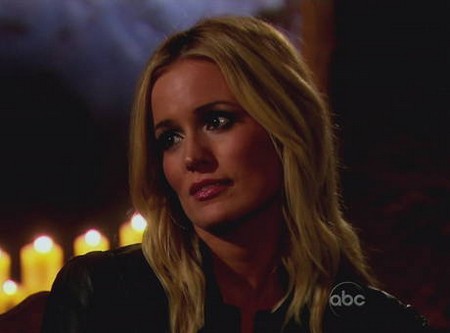 Tonight is an all new episode of The Bachelorette and Emily Maynard takes her final six guys to Prague, Czech Republic. The six remaining men are; Arie, John, Doug, Jef, Chris and Sean. Did you see last week’s episode, if you missed it, you can read our full recap here.

Something happened between Arie and one of the show’s producers, Cassie Lambert and tonight we find out exactly what that relationship was all about. Apparently Emily has known about this for quite some time now and she really was hoping that Arie would have approached her about it himself, but he never did.

Spoiler alert: If you’re one of those people who doesn’t like spoilers, stop reading NOW! We have some juicy spoilers for you about the The Bachelorette episode 7 below!

Doug, Sean and Chris get the dreaded group date. The trio explore a medieval castle with Emily. Doug is eliminated during this date and Sean gets the group date rose which guarantees him a home town visit.

There is a third one-on-one date and that goes to Jef who has a “marionette” date with Emily when they visit the Stratov Library and they do a little making out on the floor.

At the Rose Ceremony, only one guy gets eliminated since Doug went home on the group date, say goodbye to John.

Don’t forget to come back tonight at 8 PM EST to get all the answers to your questions and for our awesome recap when will be live blogging The Bachelorette Emily Maynard episode 7. In the meantime, check out the preview video below.