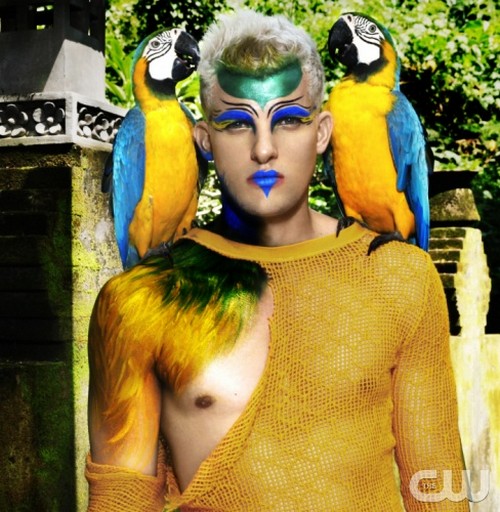 TGIF CDLers! Tonight on the CW Tyra Bank’s reality show AMERICA’S NEXT TOP MODEL returns with a new episode called, “The Guy Who Has a Panic Attack.”  On tonight’s show the models have to pose with snakes and leopards, where two of the models fail to perform out of fear of the animals.  Did you watch last week’s episode? We did and we recapped it right here for you.

On last week’s show the models got tested at a commercial shoot to do ridiculous requests with a fake director played by comedian Reggie Watts. At a “flawsome” photo shoot, which highlighted flaws to show they are beautiful, one of the models could not focus because of a fight between the girls and the guys in the house.

On tonight’s episode the guys and girls go to Bali, where they have to model swimwear while trying to walk under water and one of the guys suffers a panic attack. At a photo shoot at the local zoo, the models have to pose with snakes and leopards, where two of the models fail to perform out of fear of the animals.

Welcome to Bali! Al the contestants are of course excited to have finally reached the promise land but that doesn’t mean they can’t not make fun of Jourdan’s excitement. She did grow u in a small town but her enthusiasm for the little things is just too funny to pass up.

Their hotel is beautiful. They’ll be staying at a private villa where the winner from last week, Nina, still gets her perks in the Guess Closet. The place is just fantastic and dare might it be said; romantic. Renee and Marvin have been getting closer for a while. Like sharing a bed. They haven’t put a label on it yet so you never know what might happen.

No one believes Chris H. should have been allowed to stay. Hopefully this next challenge will knock him right out of the competition. If anything an underwater runway could knock out several people. Don is hyperventilating while they’re still on land. Nina on the other hand has a health concern stemming from an old injury that will not allow her to go too deep in the water.

The directors advised some doctors and she’s not allowed to do the walk. Marvin will secretly be glad. He wanted Nina to get sideline so he did get his wish. Although once underwater Marvin didn’t impress anyone with his walk. He did also root for Don. He tries to help him through his anxiety attack but nothing he could do could stop Don from quitting the runway. He simply couldn’t do it. He goes through a full panic attack.

Luckily the judges will take his attack as a medical thing thereby allowing him and Nina do an alternative shoot. They can do some snorkeling shots. Neither wowed the judges but at least Jourdan didn’t win. Renee won.

She celebrated her win by hanging out with Marvin later. He says they serve as each other’s distraction which helps them relax throughout the competition. It seems to be working for her. Not necessarily for him.

Nina got low scores during the challenge that she applied extra pressure on herself to do better during the shoot. It failed her. Their photo-shoot involved modeling with animals. Nina couldn’t control her python. So it was always out of focus. When that happened she let go of her pose and appears to have forgotten where exactly to find it again.

No one can stay in position with a moving snake. Not Nina and not Don.

Renee freaked out with her cheetah. Nothing like being told no quick movements will help put a girl at ease. Jeremy did great with the cheetah. Later when Renee is congratulating him, Marvin takes exception. He gets into an argument with her and somehow the fight becomes who’s the better model between them. Cory is the one that has to remind to act professional.

The only people that can decide on the best photo are the judges. Panel has to come around before anyone can truly think they’ve won the best picture.

Jeremy thought he was great but he wasn’t. Jourdan did horrible or catalog in Tyra’s opinion. The people that did great were the ones getting ragged on at the shoot. Nina, Don, and Chris H. Only Marvin was left out. Poor Marvin. No happy surprises for you.

Nina won best photo and worst photos goes to Don. He lost his social media backing this week and it sent him home. The beautiful boy is leaving but before he goes he’s sending all oh love to his friend Marvin to win.