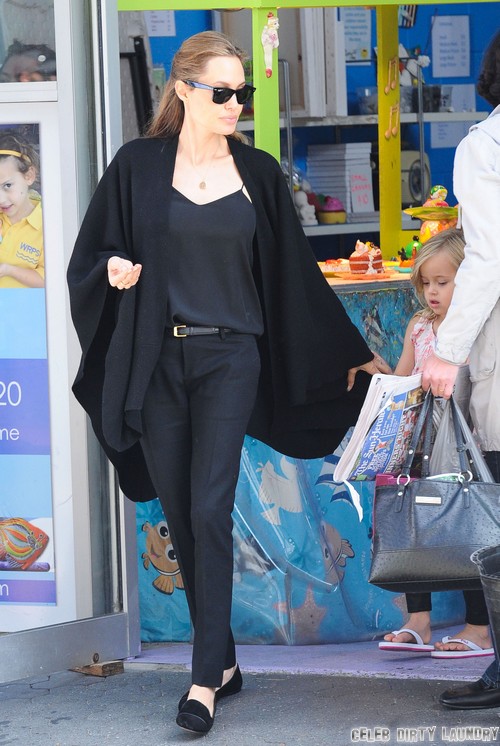 According to a new report from Star Magazine, Angelina Jolie is addicted to tanning. Oh Star, how I love thee. This has got to be in the top 10 most ridiculous stories they’ve ever come up with.

Anyway, Star’s ‘source’ explains, “Angelina loves the feeling of a tanning bed and getting UV rays, but she’s terrified of skin cancer. So she lathers on SPF 30 sunscreen before getting in her bed.”

The ‘source’ even adds, “Brad Pitt thinks it’s hilarious — he says there’s no point in using the bed if she is going to put sunscreen on to slow the tan. His newest nickname for her is Tangelina. She wants her skin to be adjusted in order to prevent burning. She’s convinced the tanning bed and SPF combo gives her a glow without the tan.” Apparently, her tanning addiction is supposed to ‘prepare her’ for life in Australia, where Angelina’s currently in pre-production on her new film Unbroken.

So, I’m just curious, have any of the writers at Star glimpsed Angelina’s complexion over the past few months? Or even the past few weeks? She looks like a ghost warmed over, and she’s so pale that you can actually glimpse the veins under her skin. Now, there’s absolutely nothing wrong with that, but to suggest that Angelina’s ‘addicted’ to tanning when the evidence contradicts that claim is ridiculous.

Besides, Angelina’s recently been very health conscious – as evidenced by her double mastectomy – and there’s no way she’d do something as risky as get addicted to tanning beds. Those things are even worse than tanning in normal sun, and they come with a whole host of side effects that aren’t as commonly known.

What do you guys think about the story? Do you find it as hard to believe as I do? Let us know in the comments.

Angelina Jolie has a girls’ day with two of her daughters, Vivienne and Shiloh, in Sydney, Australia