Beyonce Spent How Much On A Diamond Encrusted Barbie For Blue Ivy Carter? 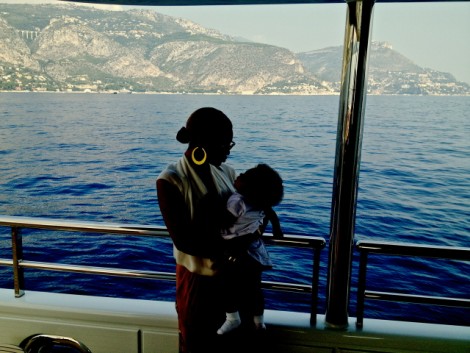 Rich people do rich people things. I try not to care or have too big of an opinion on their spending habits. But I’m beginning to (not hate, that’s too strong of a word for a one-year-old) but strongly dislike Blue Ivy Carter. The stories coming out of the Beyonce/Jay-Z camp make Suri Cruise look neglected and her father’s a crazy Scientologist. So how did Beyonce and Jay-Z go overboard this time? Well, let me fill you in.

As you probably know BIC turned one last week. Dude, where I come from that means a half-assed party filled with  immediate family watching some sporting event and a smash cake. Maybe you got a rewrapped toy that wasn’t played with by your three older siblings but now I’m realizing my parents might have just been cheap and assh-oles. Because I doubt Blue Ivy’s first birthday saw any hand-me-downs. No, BIC got a barbie that just happens to be encrusted with diamonds worth around $80,000. Lucky biotch.

According to The Sun, the doll is said to include 160 diamond gems as well as white gold jewelry. The little tyke received the gift at her princess-themed birthday bash (naturally) in New York, decorated with around $70,000 worth of white and pink roses and a cake costing $2,000. But to Jay and Beyonce’s credit, they didn’t leave out their guests. They also bought BIC’s friends over $30,000 worth of goodies including jewelry sets, princess costumes and playhouses. God, that sounds amazing. The parents also took home personalized gold pens with Blue Ivy’s name engraved on them (who wouldn’t want that?) as well as concert tickets. Score.

I’d like to see this diamond-encrusted barbie. Blue Ivy won’t  know how to appreciate it. She’ll probably just suck on it and throw it in her gigantic room with all the other unnecessary things her parents buy her. Apparently, Beyonce is reported to have said she feels no guilt spoiling her kid this early because she wanted this birthday to set the tone for the rest of her life. Oh, I’d say the tone has been set and the gauntlet has been thrown. Not to bring everything back to Suri Cruise but her tantrums will be nothing compared to what this little one is going to give us. God, I would do anything to be around the first time this kid hears no. Please Lord, let it be in the middle of Manhattan with a swarm of paparazzi filming.

What do you think of Beyonce’s gift? Are she and Jay-Z spoiling that baby or would you do the same if you had the money?