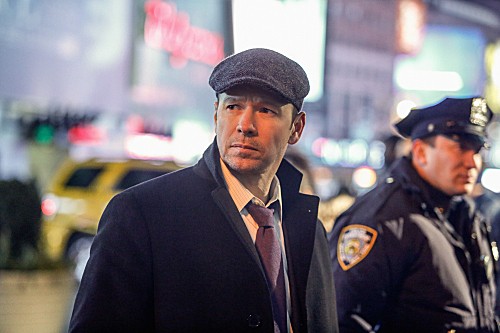 Tonight on CBS BLUE BLOOD returns with a whole new episode called “No Regrets.” On tonight’s episode Frank helps an old friend come to terms with his alcoholism. Did you watch last week’s episode? We did and we recapped it for you.

On last week’s show Danny’s latest case involved a pair of “Bonnie and Clyde” bank robbers.  When an off-duty cop tried to stop a bank robbery, he was disarmed by the “Bonnie and Clyde” robbers who took his gun and wounded an innocent bystander. Meanwhile, Frank considered getting romantically involved with a woman from the ACLU who happened to be Erin’s acquaintance.

On tonight’s show when the same tragedy occurs to people who don’t appear connected, Danny must find what they have in common and who is responsible. Meanwhile, Frank helps an old friend come to terms with his alcoholism.

Blue Bloods “No Regrets” airs tonight at 10:00pm ET and we will be live blogging all the details. So don’t forget to come back and refresh your screen often for live updates. While you wait for the show – check out the sneak peek video of tonight’s episode below and let us know what you think of the season 3, so far!

RECAP: There is a shooting in Time Square, some guy got shot right in the chest. At the station it’s Sarge’s birthday and everyone else is there with a cupcake and a candle in it to wish him the best.

Frank is at a speech for the Intrepid, while Danny heads to the scene of the crime.

The victim is Martin and works downtown, he was texting someone named Tess just before he died.  Witnesses have different accounts of the shooter.

Frank is with an old friend, Pete who asks him why he never went into flight school, Frank says he always thought he would be a Marine on the ground. His old friend’s wife Amy would love to move to New York, so he asks Frank if he can help him out to find a job because he is connected in New York city.

Danny visits Tess, she is overwrought with grief, they were going to celebrate her being pregnant and she didn’t even have a chance to tell him. Danny tells her that her husband was targeted and wants to know if he had any enemies, anyone that would want to kill him.

Jamie is patrolling the streets when he finds a frightened child who is hurt, but the blood on his shirt turns out not to be his blood, it’s a different type. Jamie tries to talk to the kid, asks him his name, it’s Kyle.

There is another killing in a retirement home, same mo as the last guy who did the killing in Time Square.  Danny is at the retirement home, the victim’s name is Ruth. This time, there is video surveillance. The shooter walked into the home and just killed Ruth like it was nothing. One of the women in the home tells Danny that Ruth liked to drink and she confided in her that she once killed someone.

Garrett gives Frank an update on the potential serial shooter, just when Frank’s old friend arrives. Frank tells him that he made a few calls, then asks him what has happened between him and his wife Amy. Pete says Amy left him and he thinks if he lands a job in NY and gets her and his daughter out of Houston, they can make a fresh start. Frank then tells him the reason he never went to flight school is because he is afraid of flying.

Danny asks Erin for a favor, he wants to meet with Trevor, a fellow lawyer who tried Ruth’s case. She was a slum lord, someone threatened to sue her and Ruth drove over the woman with a car. Ruth got off, but the victim, Joan’s son Kenneth was not happy about it and vowed vengeance.

Jamie finds Kyle’s parents, the two had a fight in front of Kyle and then he ran away. Kyle’s father dropped a glass, he cut his hand and that is how Kyle got the blood on him. Jamie lets Kyle return home to his parents.

Danny has Kenneth in the station, he admits to breaking into some guys apartment, Larry, he stole his computer and sold it for dope. Kenneth is shocked to find out that Ruth was killed just as Sarge walks in and announces that the shooter stuck again.

This victim has no id, he was found near a bridge. Danny is at a bar with Erin, he is worried about the case. Diaz calls, they have an id on the victim, his name is Eddie. Erin is at a bar, she bumps into Pete who says he is meeting Frank for a drink soon.

Jamie is at home and Linda wants to know what happened to Kyle. Jamie says that Raoul, Kyle’s dad cut his hand and that is where the blood came from. Linda says that the blood found on Kyle’ shirt could not be a biological father, so Raoul is not his real father.

At the family dinner, Danny reveals that the third victim was also a killer, Erin says that maybe someone is trying to speed up the process of getting rid of these people that did bad.

Frank, Erin and grandpa are playing cards when the conversation turns to Pete. It turns out that Frank didn’t meet Pete at the bar.

Jamie heads over to Kyle’s house to check on things and his mom tells Jamie that Raoul is in fact not his father just when he walks in and he is furious, it seems that Raoul never knew and freaks out.

Frank goes over to see Amy, she didn’t know that Pete was in NY. Frank tells Amy that Pete wanted him to find a job and bring her and her daughter to NY. Amy says Pete divorced her, two different stories. Amy says it started a while ago when he started drinking more and more. Amy and her daughter Heather are really sad and don’t understand why Pete doesn’t pick up the phone and call them.

Gayle shows up at the station, she tells Erin that Trevor had to go to the ER in the middle of the night and he is really sick. Erin tells Danny that she thinks the killer is Trevor Holt, he apparently prosecuted all the cases and they got away. Erin says that Trevor is dying of pancreatic cancer and she thinks that killing these people is his bucket list.

Frank meets with Pete in a bar and confronts him about his drinking, he goes on to tell him not to expect him to believe the lies he is telling about himself. Frank says there are jobs out there for him, but he needs to reach out to Amy and Heather first.

Danny needs to find Trevor, he has headed to a food truck in the park and Erin thinks he may be shooting someone again.

Jamie is at Kyle’s home and finds Raoul packing his things, Jamie tells him that he is only going to make Kyle suffer and he is the only father that he has ever known. Jamie explains that maybe he should get to know Ted, his biological father, but Raoul is his dad and he should find a way to stay together with them.

Danny is close to the food truck and he takes off running when he sees Trevor heading towards the truck. Trevor has his gun aimed to kill the guy in the food truck and Danny tries to talk him out of it just as Trevor says “tell everyone I am sorry” and shoots himself in the head.

Danny heads over to see Erin, he breaks the news to her and she is clearly distraught.