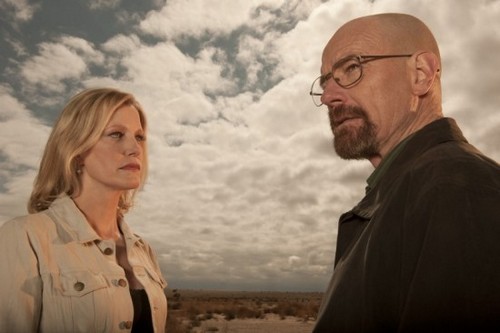 On last night’s episode 14 of BREAKING BAD first up is a flashback of what would have been the first season. Walter and Jesse have been cooking. Jesse goes to light a cigarette and Walter tells him to do it outside ( cause the R.V could go boom boom). While Jesse is enjoying his smoke Walter is talking to Skyler. Skyler wants to know what he thinks of the name Holly for the baby. Walter hangs up and he and Jesse exchange good byes.

Desert present time and it picks up a few minutes after the last episode. The guys are looking for Walters barrels ( Walter looks absolutely devastated), they are also still looking for Jesse. After a beat the have all his barrels. Walter notices something out of his eye under one of the cars. They guys put the barrels in the trunk and leave one for Walter, they drag Hank’s body away (sniff). Jack tells Walter he hopes there are no hard feelings as they uncuff him. Todd offers his condolences for his loss ( Hank I assume since Jesse is still alive). Jack and Walter shake. Walter then reminds them that they still owe him something JESSE. Walter looks under the car (hint hint wink wink fellas) and sure enough they see him and drag him out. Jack puts a gun to Jesse’s head and Walter being the complete sociopath he his just nods. Todd thinks they should find out what Jesse told Hank. Walter just wants him dead. Walter has a “on a second thought moment” and tells Jack to wait just a minute. Walter walks over to Jesse and tells him that he could have saved Jane but instead Walter chose to stand there and watch her die. Todd and Jack drag Jesse off and Walter being the sociopath he is he just stands and watches.

Walter gets into his car (I presume) and fixes the mirror. Walter starts driving off and the car stops, it’s out of gas. (I’m guessing from all the bullets that were flying around last week. On that note I’m surprised they aren’t more in it). Walter decides to just roll his barrel along, right out of the desert. Walter comes up to this house right smack out in the middle of the desert (how convenient). Dude comes out and says Hi. Walter clearly not in the mood and short on time and patience cuts right to the chase and ask the dude how much he wants for his truck. Dude tells him it’s not for sale. Walter is like please everything has price and hands the guy a wad of cash. Sold. Walter puts the barrel in the truck and drives off.

Marie shows up at the car wash and gives Junior a hug. Marie tells Skyler they need to talk and off to Skyler’s office they go. Marie informs Skyler that Jesse turned and told Hank everything about Walter. Hank has Walter under arrest at this very moment in fact (man oh man is she in for one hell of a slap in the face). Marie tells Skyler she wants all the DVDs that Walter made. Marie also tells Skyler that she is her sister and even though she doesn’t know if she can ever trust her again she does care about her and she knows Skyler needs to get the hell out of there with the kids before its to late. Skyler is crying. Marie has a FYI for Skyler , she either tells Junior what his daddy has been doing all these years or she will.

Jesse is in a room (with a really bloody face). For whatever freaking reason Todd is putting a ladder in the room. Jesse is talking gibberish ( something about something being somewhere and only he and Walter know about it and they should go get it at Walter’s house?!? That was as vague as the descriptions of this show have been this season). Jesse is crying and Todd leads him into another dark room more of a warehouse really and Todd flips a light. Which leads us to find out why Jesse is still alive it’s a meth lab and they want Jesse to cook for them. Todd uncuff’s him and then leashes him to the wall. On the wall is a picture of Andrea and Brock (to serve as a reminder for Jesse of what is at stake if he doesn’t cooperate).

Skyler and Marie have just dropped the your dad is a sociopathic drug dealer on Junior. Junior tells them it is all bulls**t and he doesn’t believe it. Junior wants to talk with his father. Marie tells him he needs to calm down. Junior takes off. Marie tells Skyler she needs to go home with the kids. Skyler is just sits there crying. (Skyler needs to focus up, because this is nothing compared to what is coming).

Meanwhile Walter is at home and he is packing, actually more like throwing his clothes in a suitcase.

Skyler is driving home with Junior. Junior is still pissed. When they get home they see the dudes truck that Walter bought. They head inside. Walter tells them to pack. Junior would like to speak with his father. Walter tells him to go pack now. Skyler then ask the million dollar question and it involves Hank and his whereabouts. Walter being the sociopath he is tells Skyler that they negotiated (as if bullets flying through the air consist of negotiating). Skyler finally wising up and seeing how things really are is having none of that and ask Walter again about Hank. Walter tells her that he has eleven million dollars and that they can start over again new lives, new place, new everything. Skyler who is completely focused up, figures out that Walter killed Hank. Walter tells her no he didn’t (apples and oranges) and that he in fact tried to stop it (that is technically true).

Skyler goes in the kitchen and picks up the nearest thing she can use as a weapon ( what a beautiful knife you have my dear). Skyler points it in Walter’s direction and demands that he get out of the house. Walter decides to press his luck and walk over to Skyler. Walter gets the Whammy in the form of a cut hand. Walter grabs Skyler, poor Junior walks in on all this craziness and grabs Walter and gets him off of his mom. Walter is shocked that they have seemingly turned on him. After all they are his family.

Junior calls the police. Junior tells them that his father is dangerous and that he very well might in fact kill someone.

Walter is outside getting in the car to leave. Walter has little Holly with him. Skyler comes out screaming and hitting the car with her fist. Walter just drives off ( she chases him down the road for a bit) and she is just left standing there in disbelief. Skyler falls to the ground, tears streaming down her face.

Two more episodes to go. How will it all end?