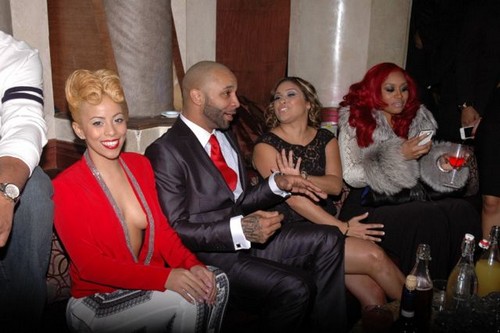 Last night in New York, VH1, Monami Entertainment and NFGTV celebrated the third season of the hit series “Love & Hip Hop” with a private bash at Meatpacking District lounge Kiss & Fly and Celeb Dirty Laundry was thrilled to be there.

Too many stars play nice for PR. That’s just the way the game is played, but rules were made to be broken. On “Love and Hip Hop”, where all is fair, no one holds their fire; everyone gets put on full blast and season 3 of the series continues that tradition.

Chrissy Lampkin and Jim Jones might’ve left the show for their own spinoff, ‘Chrissy & Mr. Jones’ but the pearly gates of shade have been left open. Viewers should have no problems strolling through as the rest of the cast and new faces keep the insults hanging in the air long after the commercial breaks.  They’re all still sipping, swishing and spitting out the tea in each other’s faces.

VH1, Monami Entertainment and NFGTV celebrated the third season of the hit series with a private party at Meatpacking District lounge Kiss & Fly last night.  Yandy Smith, Joe Budden with girlfriend Kaylin Garcia, Tahiry Jose, Erica Mena, Rich Dollaz, Consequence, Jen the Pen, Raqi Thunda, Lore’l, Winter Ramos, and Rashidah Ali were in attendance to keep the wheels of their media blitz rolling along. Olivia was in Italy and missed her time in front of the cameras but there were over 400 fans that got the opportunity to watch the premiere exclusively its premiere. The champagne was flowing, the crowd oohed and the cast teased what was to come during a Q&A moderated by Hot 97’sLaura Styles and J. Medina.

As scripted as reality TV has become, there is a sincerity of heart beating at this series’ core. You can’t fake the kind of emotion that is displayed on screen. It’s easy to throw a choreographed punch, but it hurts even more when you’re trying to make something happen for yourself and life gets in the way. In the land of “Love and Hip Hop”, it’s not too hard for viewers to see their own names scroll down the credits.

[CHECK OUT ALL THE FUN BELOW]