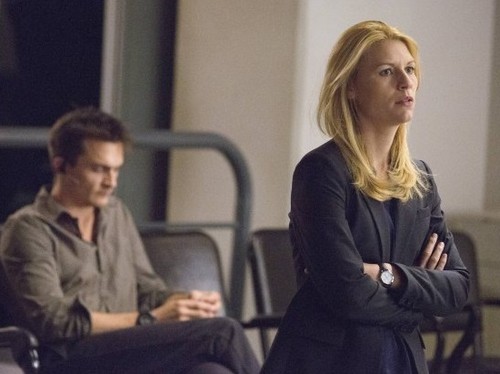 Tonight’s episode of HOMELAND was my favorite of all season’s 3 episodes – as a matter of fact I think more happened tonight than the rest of the season.  I cannot wait for next week, good news, we have managed to get our hands on a sneak peek video and a few spoilers to whet your appetite as you wait  for next week’s episode 10 “Good Night.”

On tonight’s episode Brody is back in the USA and not in great shape.  We know that while Brodie was captive they go him hooked on heroin and Carrie tried to convince him to get clean.  Saul started to become frustrated when Brody was not detoxing fast enough so he tried and experimental drug on him that had nasty side effects.  Saul goes to the hospital and fills Carrie in on what he has planned for Brody.  Saul hopes Carrie can get Brody with the plan.  Carrie fills Brody in on Dana’s situation and it is enough to get him working hard to get in shape.  Carrie did not tell Brody she was pregnant, but he did leave to do what Saul wanted and told her he would be back.  Did you watch tonight’s episode?  We did and we recapped it right here for you.

Spoiler alert: If you’re one of those people who doesn’t like spoilers, stop reading now! We have some juicy spoilers for you about the season 3 episode 10 of Showtime’s “Homeland”

Official Showtime synopsis of next week’s episode: “Good Night. Brody embarks on a mission with high stakes; Quinn makes a discovery about Carrie; Fara must rejoin the team.”

On next week’s show Brody has to make a choice is he going to trust what the CIA and Saul are telling him, after what he has been through it is going to be tough or Brody can just take off.  What Brody does not know is that if he asks for aylum in Tehran Dar Adal has that covered he has drones with bombs he can drop. Meanwhile Quinn of course finds out that Carrie is pregnant.

Homeland season 3 episode 10, “Good Night”  airs on Showtime on December 1st, 2013. Check out the preview video below and some photos of season 3 episode 10 and let us know in the comments below what you think!  Are you enjoying season 3 of Homeland?