Joe Giudice Pitching Reality Show From Prison, Will You Watch? 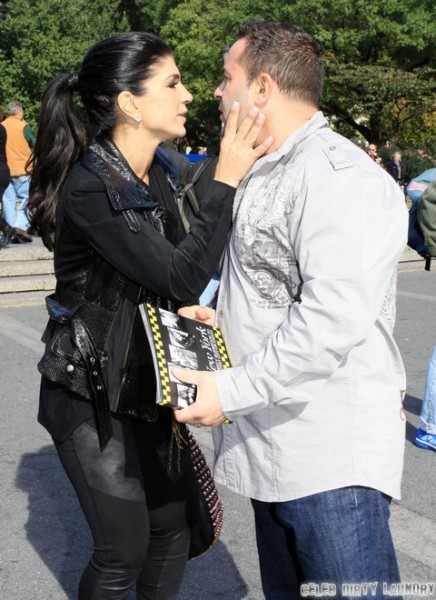 Sign me up. Sign me up this second! All you had to say was Joe Giudice reality show and I was hooked. Throw in the prison element and I’m like the fat kid swimming in Willy Wonka’s chocolate lake.

According to the National Enquirer, Teresa Giudice’s better half is pitching a show to Bravo regarding his possible upcoming jail sentence. He’s looking at 10 years in prison if he’s convicted of wrongfully using identifying information of another person and  impersonation while trying to obtain a fraudulent driver’s license under his brother’s name.

He’s pitching a reality show that would show his day-to-day encounters while in jail but he wants it to be a Housewives spin-off that shows him in some Godfather-type light. Apparently there will be a lot of chin scratching and advice giving, maybe even a cat thrown in for good measure. A source said producers are optimistic the New Jersey State Prison will play ball. And why not? There have been plenty of reality shows showcasing life behind bars why can’t Joe Giudice get in on some of that action? You’d think he was almost excited to get convicted now. He’s already come up with key scenes including one where he fires his lawyer after the judge throws the book at him. Well talk about making lemonade out of lemons!

And you can see another cookbook coming out of this right? Teresa’s new how-to on creating shiv-friendly cupcakes for your man! And then she’ll probably divorce him and get a spin-off show so this little sentence is a win/win situation for all.

I’m not even remotely surprised by this. And I’m not worried about what the other inmates will think or do. Have you ever seen Joe Giudice do a roundhouse kick to the punching bag in his garage? You do NOT mess with HIM! He’ll let those dudes know what’s up right away. Reality shows are not for pussies!

What do you think Andy Cohen will do? Will he sign off on the Joe Giudice/prison reality show? It’s not like Bravo has standards or anything.