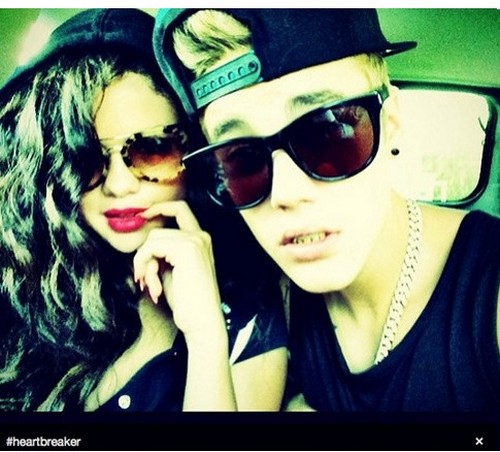 Young love seems to be in the air again. One time lovebirds Justin Bieber and Selena Gomez appear to be back on thanks to a little Instagram photo from the Biebs.

Justin and Selena spent the July 4th holiday together but does that mean that they are back on as an item? The speculation is on fire as to what is really going on between J and S and you won’t get a straight answer from either one of them. Justin as I mentioned took to Instagram, as he does with pretty much everything these days, posting the pic of the two looking very posed. He accompanied the photo with the caption #heartbreaker. A very cryptic caption that could mean a number of things. Is he calling her a heartbreaker, is he referring to them working together or something completely different, who knows and that is why the duo likes it.

Along with the picture that Justin posted is video from his pal Alfredo Flores that shows the “Boyfriend” singer with a sparkler and a very special guest star in the end, Gomez. Not long after the video hit the Net Bieber took to Twitter to make the comment “Great Night”. Oh the suspense is building are Justin and Selena back together? All signs of the last day point to yes but that doesn’t mean they are officially back on.

The romance of the lovable Disney starlet and the pop teen sensation has played out in the media since the beginning. Their make-ups, break-ups, etc so this is just the next chapter in the story of Jelena. Although I am not a big fan of either of them I sadly admit to being very intrigued by their relationship and can’t wait to see how this latest union unfolds. Thankfully there is social media and The Biebs’ love of it to keep us all somewhat informed of what is going on.

What do you think about the news that Selena and Justin are reportedly back together again? Do you think it is for real? Tell us what you think in the below comments section.