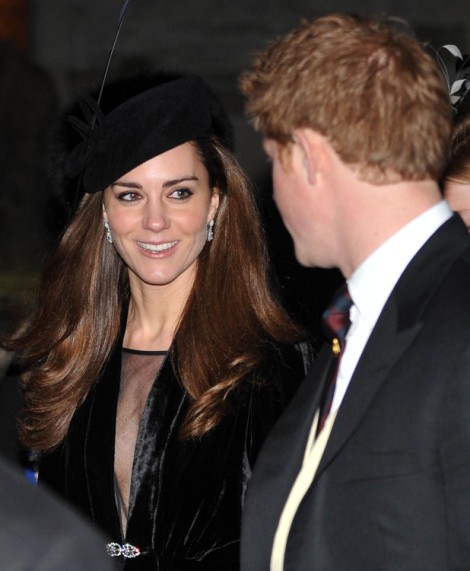 Now I know you’re thinking, “Why should Kate Middleton take any responsibility over Prince Harry’s love life?” Because she’s the savior of the royal family and there were all those stories flying around that she was making it her mission to find him an honest woman before he screwed up in Las Vegas and got shipped off to Afghanistan. I think she loves meddling in her brother-in-law’s bachelor issues. Who wouldn’t like to after you’re already comfortably married? But either Kate dropped the ball or that baby bump of hers is taking up too much of her time because Harry’s got a whole lot of issues going on.

First we have Cressida Bonas. Prince Harry started hitting it with her last summer. She’s pretty, blond and comes from good stock so many saw her as a potential princess. He embarrassed the hell out of her when he got caught cupping his balls in Vegas but she gamely decided to stick with him while he went off to war. But are her attentions fading? The Daily Mail has plenty of sources gabbing that Cressida’s playing hot and cold with Harry ever since he returned and it’s driving him crazy. He apparently really likes her (or likes what she’s not giving him) and his head is all screwed up over it. This is very smart on her part. Harry likes drama and loves girls that play hard to get – much more than his brother, Prince William. Just remember his crazy seven-year on again/off again with Chelsy Davy.

And speaking of Chelsy Davy…. Prince Harry’s former love just attracted TONS of attention by breaking up with her serious boyfriend and escaping the country. Is it odd timing that it just happened as Harry came back? It’s been said she’s taking a break from her job at a London law firm and she’s hiding out in Portugal. Does she want Harry to follow her? I’d almost given up hope on a Harry/Chelsy reconciliation because she has again and again made it quite clear that she does not want to be a princess but why all the dramatics all of a sudden? She seemed to like her boyfriend just fine when Harry was thousands of miles away. Oh, what the hell, follow her Harry!

So for those of you tired of Kate Middleton’s baby bump already, Prince Harry’s girlfriends should keep you more than occupied. Do you think there’s a chance Harry will settle down with either of these women? Is Kate too preoccupied of late to be Harry’s voice of reason with his girl troubles?