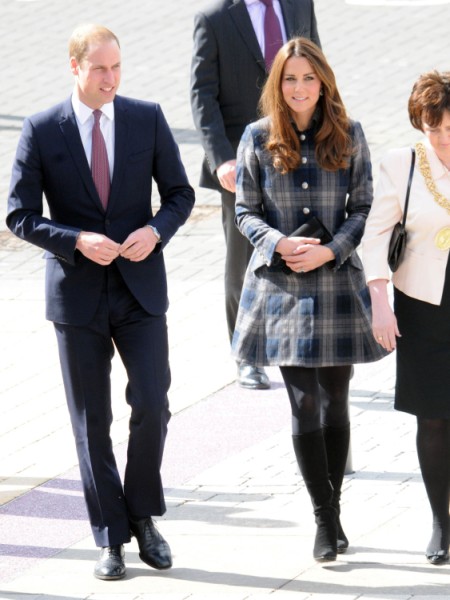 Here are Kate Middleton and Prince William in Scotland today starting out a two-day tour. What do you think of the Kate Middleton Glasgow outfit? It’s a tartan Moloh coat. I’m not feeling it. The color just isn’t doing it for me but they can’t all be winners. But do you think the Irish or Scots ever get annoyed by her lack of imagination? When Kate’s in Ireland she wears green (hell she wears the same jacket) and when she’s in Scotland she wears plaid. Does that annoy the shit out of anyone else? Just asking….

In other Kate fashion news, it seems her brand is ready for a trademark. Kate Middleton’s people have taken that extra step and trademarked her royal title for clothes and other products. What other products? A royal baby clothing line perhaps? We’ve already reported that the baby clothes are coming. Will they be endorsed by Kate after all? She didn’t want to be a clothes horse but perhaps the heir will take after its paternal grandmother after all.

So is Carole Middleton whispering in her daughter’s ear telling her to strike while the iron’s hot since those Windsors like to divorce their wives when they get out of hand? I doubt it. Unlike Party Pieces, Kate’s trademark and potential baby clothes will not make her or William any richer. All proceeds from her name go to the Royal Foundation of the Duke and Duchess of Cambridge and Prince Harry (best name ever! I love the “and Prince Harry” part).

We’ve had this conversation before. Is it OK for royals to sell themselves if it’s for charity? Since their main purpose is to sell their importance I would say so. The beauty of the British monarchy is it pimps itself out with so much more class than others.

Are you anxious for those baby clothes? Will you be buying a onesie with Kate’s face on it? Don’t lie. You know you’re going to think about it!