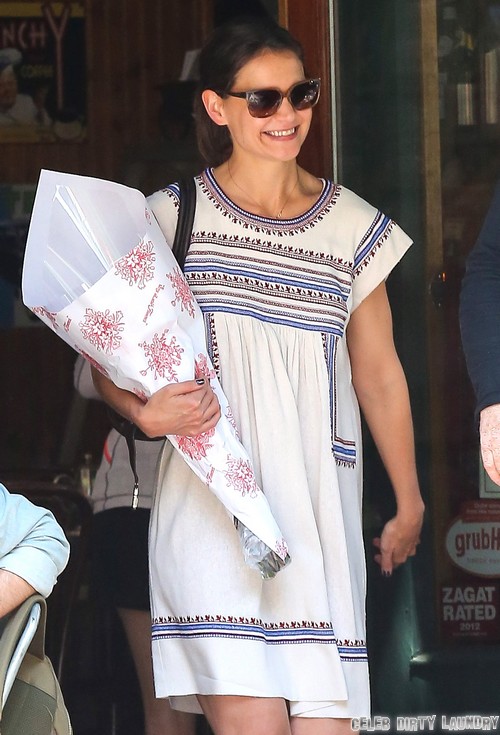 When Katie Holmes and Tom Cruise were still together, there were rumors that they wanted another child and were going to try after Suri was a little older. Alas, that’s not going to happen now, but it seems that Katie’s desire for another child has not gone away after her divorce to Tom.

A new report from the National Enquirer claims, “Lovestruck Katie Holmes is telling pals that she wants to be a mom again — and new squeeze Luke Kirby is her dream baby daddy.” A source close to Katie claims, “Katie is so ready to start a new chapter in her life, and she wants to make Suri’s dream of becoming a big sister come true.” Apparently Luke is the perfect guy because, “He is very hands-on with Suri. He sits for hours playing with her and her Barbie dolls or being her tea party guest.”

Could this be accurate? Despite how much her rep tries to deny it, I think we all know by now that something’s going on with Katie and Luke. And if all those rumors of Suri wanting to be a big sister and Katie wanting another child are true, then I don’t see why Katie wouldn’t be thinking about having another child. However, I think her relationship with Luke is still very much in the early stages, and I don’t think she would risk bringing it up with him yet. If they last a few more months, then this story would probably be more accurate.

What do you guys think? Could Katie want another child? What will Tommy think of his ex-wife having another child without him – jealous, angry, insecure, all of the above? Let us know what you think in the comments.

Editor’s Note: It’s often difficult to filter the truth out of all the info that comes from Hollywood.  While Katie and Kirby’s reps say the couple are ‘just friends’ we see evidence of more.  One thing for sure – I haven’t seen Katie looking this happy in years.