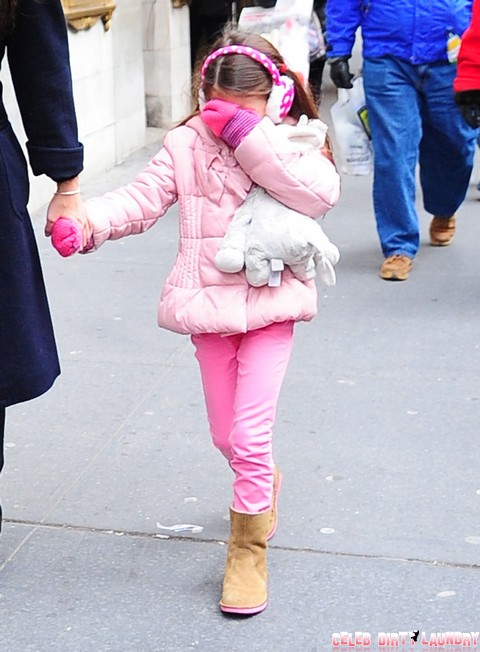 Suri Cruise is joining a handful of celebrity children in the world of modeling! Much like her British (and male) alter ego Romeo Beckham, son of Victoria Beckham and David Beckham, Suri set up for a Burberry kids campaign. Katie Holmes finds it innocent enough, but Tom Cruise can’t be convinced. The minor disagreement can’t be good for their constantly simmering fight—Tom is facing a midlife crisis, Katie can’t seem to pull her career out of the gutter, and to top it all off, they can’t agree on anything regarding Suri!

Star Magazine, print edition February 4, 2013, reported that Katie is “all for it,” since she is “in the world of fashion already, so she’s fine with the idea of a photo shoot.” It certainly seems better than a reality TV show, but Tom won’t budge! An insider explains that he “is very private  though, so he has mixed feelings and hasn’t signed off on it just yet.” It’s strange that the most famous celebrities are always the most private—sure, paparazzi and fans constantly harass them, but that’s the cost for doing what they love (and making millions), right?

But it sounds like Suri’s modeling may be over before it begins, as both parents must sign the contract, as per their divorce agreement. Suri would be a super cute child model, but this just doesn’t seem Katie and Tom! They are so unpredictable when it comes to Suri, and tend to be really private. But Burberry is the height of class. Could Katie be breaking the rules she and Tom have set up to keep Suri sheltered from the media? If Burberry is good enough for the Beckhams, it has to be good enough for washed up Tom Cruise and Katie, right? Do you think we’ll see Suri’s face in the fall Burberry kids campaign?