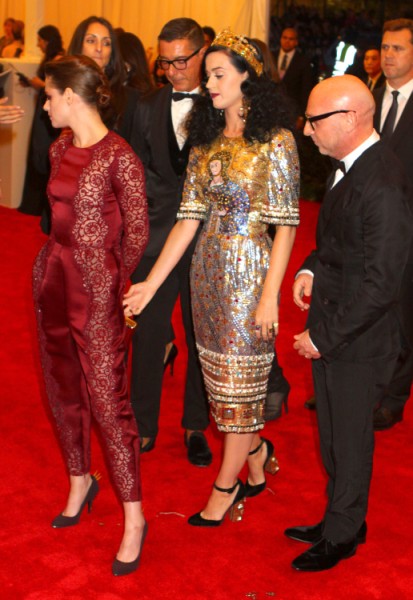 Something really may be up in the Katy Perry/Robert Pattinson department because major news sites are jumping on the idea that her recent constant presence was not great for the Twilight couple.

E! News reported a source saying Katy played “a role” in the Kristen Stewart/Robert Pattinson break up – one of many – but still a role. That’s interesting, yes? What kind of role might that have been? Was she just the sweet friend who tried to play the mediator between the two? Or was she basically telling Rob not to be afraid to live without Kristen? I have my suspicions it was the latter because according to Radar Kristen is holed up in her LA house with friends and, last time I checked, Katy Perry was no where near there. Looks like she might be Team Rob all the way on this one.

Is that a bad thing? No. She’s obviously closer to Rob. Fine. But let’s say this relationship is more romantic than platonic. Katy had better play her cards right. The last thing her career needs is a whole lot of Twilight hate raining down on her. And it will come – especially if it’s learned that Rob left Kristen for her. They need to be uber careful and play the Johnny Depp/Amanda Heard game. Apparently Johnny’s kept that relationship out of the press for the last year because he didn’t want Amanda to be known as a homewrecker. They just recently were seen holding hands at a concert. It’s the same idea for Rob and Katy. She’ll have to transition in smoothly and slowly. No adopting kids with Angelina Jolie on the second date a la Brad Pitt.

But, again, this is all conjecture on my part. Just because Katy was a factor doesn’t mean she was the most significant one. All I know is we’ve got an eligible bachelor back on the table and we all know Katy Perry has a thing for musicians and dudes with English accents.