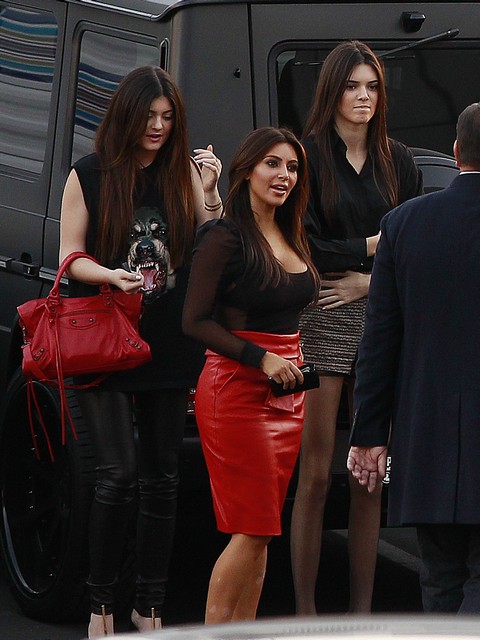 We may criticize Kris Jenner for forcing her teenage daughters Kendall Jenner and Kylie Jenner to grow up and enter the modeling world too young, but it sounds like the girls are moderately well adjusted, in spite of the dragon lady momager’s best efforts to spoil them! Kendall and Kylie love posting silly videos on their Keek accounts, and today used their Twitter’s to gab like normal teenage girls—the kinds of girls who don’t have entire closets of Louboutin shoes and Celine purses, reality show TV contracts, or Teen Vogue cover shoots under their belts.

“Just had 3 cupcakes and 2 lollipops . . . sleeps not an option right now #SugarRush” Kendall, who is 17, tweeted. This relieves me for a few reasons. The first: she isn’t anorexic or on some weird model diet plan imposed by her mom! She can go crazy and binge on cupcakes, just like a normal human! Second, she wants to! It says a lot about her psychological health that she hasn’t developed any weird, industry related carb phobias!

Her 15-year-old sister Kylie was less interested in cupcakes, and more into guys! The youngest Kardashian stepsister tweeted “There’s only one guy out there for me..And you are NOT him . . .  ;) @jordynwoods.” Kylie also just shared a very telling series of Q & A videos on her Keek account, in which she describes how she moves past hateful gossip, giving advice beyond her years! “Don’t listen to what people say about you. It doesn’t matter, as long as you are surrounded by good people. You know who you are, truly. That’s all that matters.” It’s great to see these girls grow up into unique people. We hope they can turn out healthy, happy, and as innocent and carefree as they seem to be now! Do you think Kris should keep her youngest daughters in school and out of the spotlight?