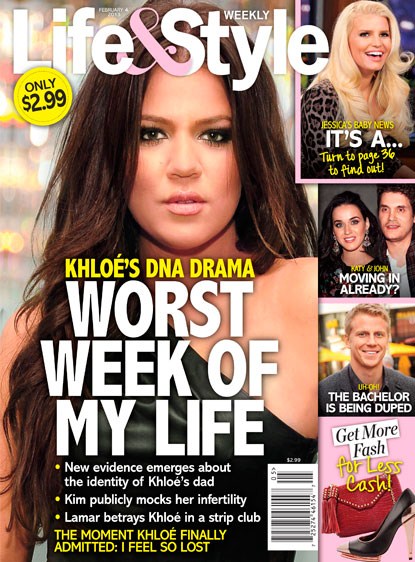 I was one of those people that really wanted to believe that in that dysfunctional Kardashian family there would be one person that would get it right and have a decent life. They all have money but Kim Kardashian is married to one guy while she carries another mans’ kid. Kourtney seems to be a great mom but puts up with often MIA baby daddy, Scott Disick. Kris Jenner is more manager than mother and she freely admits to lying and cheating on those she claims to love the most.  Khloe and Lamar Odom seemed like the best of the bunch. Their marriage has seemed as real as any in this family possibly can be.  However it really looks like Khloe’s infertility has begun to drive a huge wedge between the one super tight couple.

After years of failure it looks like Lamar is fleeing the scene rather than comforting his wife. He has been spotted out partying a lot lately and according to the new issue of Life & Style, it just got a bit worse. As she went on television on January 16 to speak about and defend her marriage, Lamar was speaking in a whole different way. He and a bunch of his team mates were partying at a Minneapolis strip club

Lamar and some team mates were escorted into the Champagne Room at the Downtown Cabaret, which costs $500 an hour. Once inside Lamar really enjoyed the attention of a dancer named “Jasmine” and he dropped over 2 grand on her alone. According to her Lamar promised to come back and visit her again soon. The Champagne Room is an anything goes room so god only knows what she did to earn her fistful of cash!

With stories of Lamar’s repeated partying circulating it won’t be long before Khloe pulls the plug on this marriage don’t you think? Tell us your thoughts in the comments below!