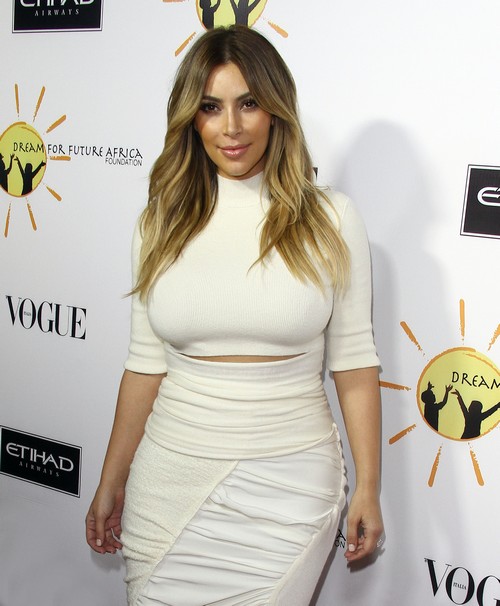 Our  favorite reality star is back to making her regularly scheduled appearances on red carpets where she sticks out like a sore thumb. Kim Kardashian and Kanye West made their first public appearance as an engaged couple at the Dream For Future Africa Foundation Gala at Spago in Beverly Hills on Thursday. Sure enough, she ensured that she and Kanye would the main topic of discussion, especially as she showed off her 15-carat diamond engagement ring. That’s not all she showed off – she also wore a hideous white gown that hugged all her curves and emphasized her butt, because apparently it needed emphasizing.

I wouldn’t be surprised if Kanye picked out the dress, just because he has horrid taste and I can’t believe she would wear something so unflattering when she knew all the cameras would be on her. But how can she say no to Kanye? He just proposed to her and gave her enough publicity to last her for another few years, which means she’ll eternally be in his debt.

Anyway, the event was sponsored by Vogue and Etihad, which means that Anna Wintour must have approved the guest list. Poor Anna – being forced to constantly accept Kim at events that are supposed to be classy but end up becoming yet another Kim Kardashian famewhore show.

It’s been reported that Kim and Kanye are in a rush to get married, but they will be signing a pre-nup first. The reports make it sound like it’s all Kim’s idea, but I think even Kanye’s not stupid enough to go into this marriage without demanding a pre-nup first.

What do you guys think about Kim’s and Kanye’s first public appearance as an engaged couple? Let us know in the comments.