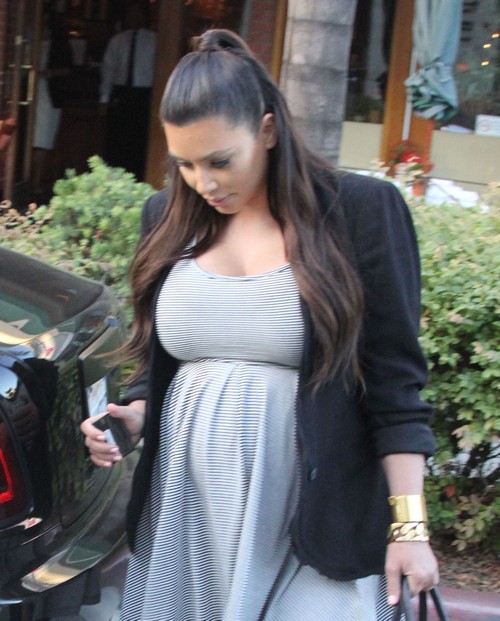 Ever since Kim Kardashian gave birth to North West we’ve seen her do things completely different. Gone are the self absorbed photo’s and shameless self promotion of her assets. While Kanye West once called Kim his perfect bitch he seems to expect a whole lot more of her now that she is a mother.  You and I both know that Kimmie may think on her own but she certainly doesn’t act on her own. Kris Jenner has been dictating Kim’s moves and decisions for years but Kanye seems to have won the battle for control.

While Kris is out promoting her talk show and giving vague and rehearsed answers about her new grandchild Kim is simply desperate to hold onto Kanye. CDL told you a few weeks ago that Kim was the first to admit that she wasn’t at all ready for motherhood and having to care for a baby for a few weeks has only reinforced that. Kanye has the upper hand now. She needs to do it his way or he’ll be on the first plane to Paris and Kim can’t even follow because the baby can’t fly for three months.

Kanye believes that being part of the Kardashian brand is keeping Kim from being taken seriously and rumor has it they are working on a bit of middle ground. Pretty Wicked Moms is a reality show that focuses on a handful of spoiled rotten ladies that have babies. The show has extended an invitation to Kim and it’s one she’s considering. While Kanye would love to pull the plug on all reality TV he also understands that this is a part of who Kim is and Pretty Wicked Moms shoots less and would be far less invasive. Plus it would sever ties with the rest of the Kardashian machine and allow Kim to remerge as  a totally changed woman, one that trades in bikini shoots for breast feeding and mommy & me classes.

The reinvention of all reinventions and it wouldn’t even happen on E! Because Pretty Wicked Moms is a Lifetime series! Is Kim brave enough to step away from Kris’ decision making? Tell us your thoughts in the comments below!