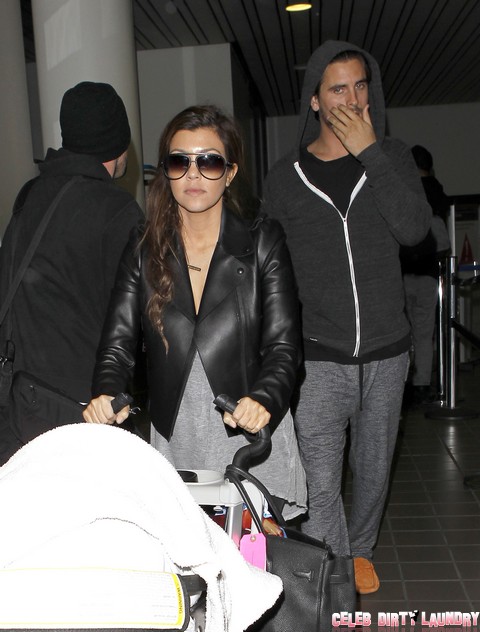 Kourtney Kardashian is known for two—okay, maybe three—things. The first: she pops out cute kids. I can’t say if they’re little terrors or not, but they photograph well. Second: she’s the oldest Kardashian. Third? She’s a doormat for longtime boyfriend and baby daddy Scott Disick. Since giving birth last summer, everyone’s been craning for a glimpse of her post-baby workout and diet plan. Kourtney dished it all in an interview with Us Weekly, print edition January 14, 2013. She’ll talk you through portion control and workout buddies, but accidently let on a bit more than she wanted!

After giving birth to Mason in 2009, Kourtney made headlines after a beach jogging accident. “I was working out and I wasn’t eating enough,” she says of her dangerous faint on the beach. “I definitely pushed myself too hard.” Resolved to learn from her mistake, she began this diet with yoga. “It was a mild way to get my body to build back the strength in my stomach,” she explains. She incorporated her kids too, by putting them in the stroller and going “for an hour long walk. A lot of it would be uphill, so it was pretty major.” An in-home personal trainer helped her and workout buddy Kim Kardashian with dance cardio. “If one of us isn’t in the mood, we push each other,” she says of her sister.

Kourtney’s biggest diet tip is portion control. “You can’t be trapped by some kind of strict diet plan. You need to live,” Kourt says of her ‘everything in moderation’ diet. But when asked about alcohol, Kourtney lets slip that her relationship with Scott isn’t all flowers and hearts—despite what she may try to put on. “Drinking doesn’t fit into my lifestyle,” she explained. This is coming from a woman whose significant other is a fratboy wannabe! What’s worse: Scott offers her no diet or workout motivation! “At night he has a major snack party . . . he takes whatever is in the pantry: chips, cookies, candy, chocolate—anything and everything.” So, you think, couples don’t have to have matching meals! But Kourtney goes on to say, “His favorite is when I’m skinnier.”

The mother of two was scheduled to give an interview about her diet plan and workout. But all of her answers gravitated towards Scott—alcohol, snacking, exercising—it all came down to Scott refusing to participate! Instead of trying to keep the house a healthy, safe place for Kourtney while she struggles to lose 45 pounds (to meet her post-baby weight of 105lbs—imagine gaining half your body weight, and having a boyfriend who keeps cupboards full of junk food). I think the real story here is that Kourtney is in a toxic relationship, tied down by her kids, and afraid to be alone. Scott seems to be contributing nothing to the relationship, or to her health! I vote Scott off the island of eligible men! What do you think?