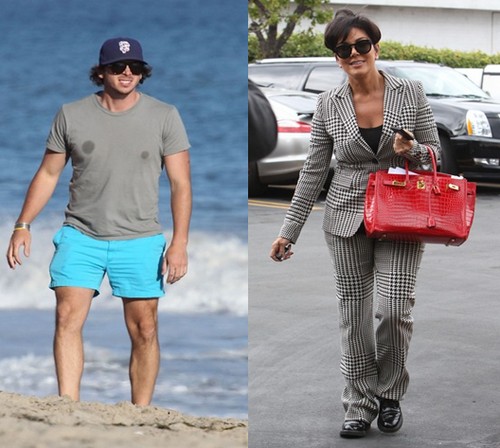 It was only a matter of time before Kris Jenner was publicly outed as a cougar, considering we’ve all seen her put the moves on younger men before. Heck, she blatantly flirts with her own daughters’ boyfriends and husbands – and now that she’s ‘officially’ separated from Bruce Jenner, I pity the poor bachelors that she sets her sights on.

I’m sure Kris has had a hard time keeping her separation from Bruce a secret for so long, especially with her famewhore tendencies. However, now that everyone knows she’s single, she’s not wasting any time on the dating scene. According to a report from In Touch Weekly, Kris has been flirting with former Bachelor star, the single and rich Ben Flajnik.

A source told In Touch Weekly that Kris has a ‘crush’ on Ben, and that they’ve actually been ‘spending a lot of time together’. Kris is showing off the romance for the whole world to see, and she’s not hesitating before posting intimate pictures with him at his residence at a vineyard in Sonoma. Of course, Kris is now a free agent and since she’s no longer hiding it, she’s decided to flaunt it. The source explains, “She and Bruce are separated, so now they’re allowed to see other people — and she’s in full-on dating mode.”

Well, poor Ben is this week’s victim. I shudder to think the long line of poor young souls that she will suck the life out of next. Will it be someone famous? Will it continue to be string of rich but failed reality stars? Will they be millionaire playboys? What do you guys think? Let us know in the comments.