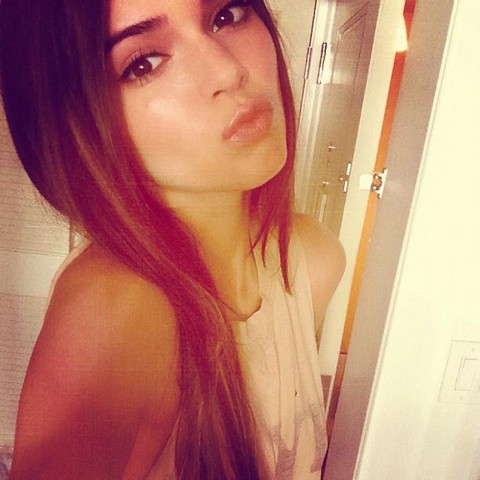 I smell another Kardashian related scandal in the making and this time it’s not going to have anything at all to do with Kim Kardashian and her baby daddy, Kanye West. Nope, this weekend the family member who is causing a bit of controversy is none other than 17-year old Kendall Jenner.  I guess somewhere in my head I had hoped that this girl would learn a thing or two from her older sisters’ horrendous choices in men. Ya know, Kourtney Kardashian chooses not only to stay with but also reproduces with  unsupportive douche lord, Scott Disick. Kim is still married to one arrogant stick in the mud while carrying the child of an even more egotistical guy. Then there’s Khloe Kardashain who has let her infertility pain drive Lamar Odom so far away that he is rumored to be hooking up with random chicks when he thinks no one is looking.

Instead of aiming a bit higher it looks like Kendall has her bar dropped even lower than her sisters, as she is rumored to be dating Lil Twist.  You know Justin Bieber’s right hand pal that is better known for his ability to roll blunts than he is for his rapping skills?  Twist posted a pic of Kendall making a kissy face to his Instagram account and insinuated that he could care less who approves of their relationship.

If you read between the lines it obviously indicates that the pairing has been met with negativity, no doubt from Kendall’s parents, Kris and Bruce Jenner. Kris loves her girls making headlines but I’m sure this is not the guy that she wants her daughter linked to. Bruce is smart too. He would guess that Kendall wouldn’t date a pothead unless she too likes to smoke and I’m sure the over bearing dad has thrown a huge fit over this young couple.

Should Kendall keep it moving and not waste her time on Twist and the inevitable trouble he’ll bring? Tell us your thoughts in the comments below!