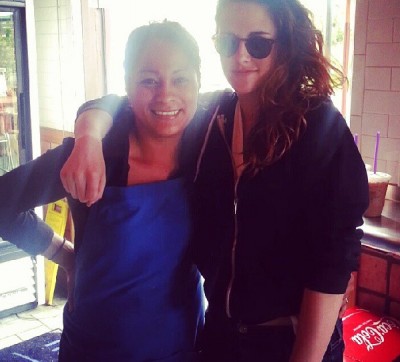 I like this new Kristen Stewart. Just look at how agreeable she’s been lately! A day can’t go by without her stopping to take a pic with fans (smile included) and she looks relatively well-groomed and washed. Perhaps she wasn’t a fan of those “Kristen Stewart Too Brokenhearted To Bathe“ stories…. Or maybe she’s tired of the Robert Pattinson/Katy Perry rumors going around. As we reported Katy and Rob snuck in a Bjork show together this weekend in Hollywood. That’s the same day Kristen posed with a fan for this latest instagram pic. Coincidence or conspiracy?

I like to think it’s a quasi-coincidence. I’m sure Kristen hears through the grapevine the comings and goings of Rob and Katy but I also like to think Kristen knows Katy has absolutely no interest in the vamp that sparkles. Katy might think she’s playing us and throwing us off the John Mayer scent but Kristen would know better. The Kristen Stewart fan pic is just pure self-preservation at this point. And good for her. Why does she have to be the one who’s moaning around her mansion, upset and dejected? Why can’t she take the break up like a man and move on? She has friends. She has upcoming jobs. Why is she always the pathetic one?

So I’m not saying these little photo ops aren’t little publicity stunts. Kristen has done them in the past but there seem to be more lately, right? I totally prefer them to her middle finger (although it isn’t half as fun for gossip). But they are showing she’s willing to play. She’s not going down without a fight. She got dumped. So what? That’s nothing. Rob made the first move and ran off with Katy. Did he want the press to pick it up and insinuate they were dating? Fine. He can win that game. But the true test it to see whose career can survive post-Twilight. And that’s where Kristen will flourish. Trust.