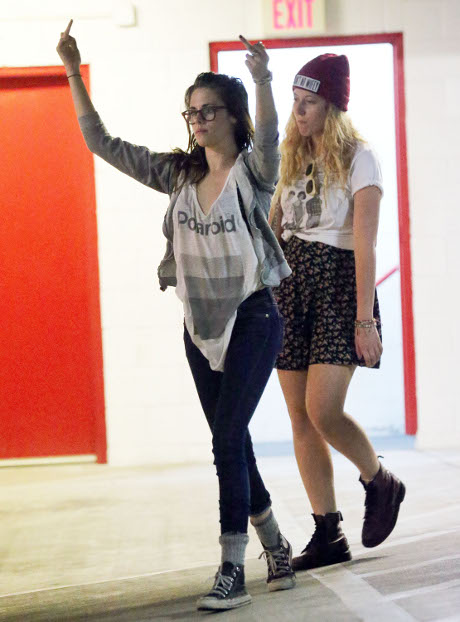 I think that Kristen Stewart needs a serious reality check. Somewhere in the misery princess’s head she actually believes that, in spite of Robert Pattinson packing up his red truck with everything including his two dogs on May 19th, he’ll still eventually come back to her. She refuses to grasp reality — the fact that her banging Rupert Sanders last summer absolutely destroyed Rob’s trust in her for good.

According to the June 3rd print edition of In Touch, when Rob saw photos of Kristen hopping into a car with a man resembling Rupert that was it. He knew at the moment that her infidelity would always haunt and doom their relationship and that he would never fully trust her again. Rob felt like after returning from months of filming in Australia the couple was just going through the motions anyway so it was really easy for him to cut the cord and put a permanent end to the doomed relationship. He had the backing of his family and friends who had all spent months shunning Kristen and disapproving of the union anyway.

He moved everything out of Kristen’s home but she still is desperately clinging to the idea that it’s all fixable. She thinks that Rob just needs to think and then he’ll be back. It sounds more like he did his thinking in Australia and by the time he returned he was emotionally over the whole mess of a relationship.

Rob has been hanging with Katy Perry a lot lately. Do you think they’ll end up together romantically at least for a little while? I think Katy would be much more careful with Rob’s heart especially since she understands what it’s like to publicly be made a fool of by a cheating partner.

Is Rob really done this time? Tell us your thoughts in the comments below!