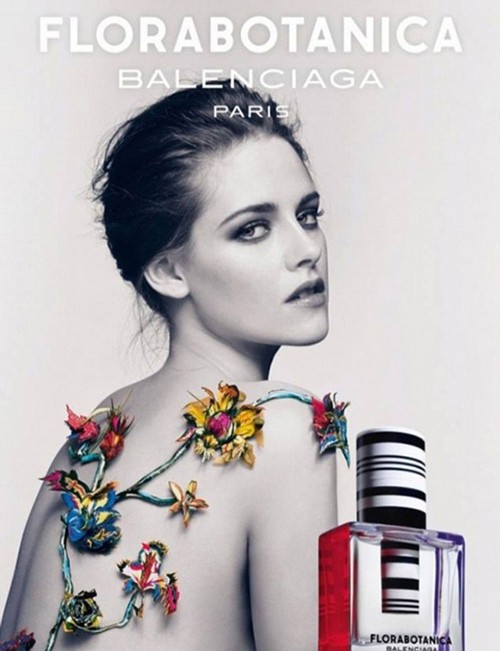 The timing of this latest Kristen Stewart Balenciaga ad seems suspicious to me. I’m sure there’s nothing to it, but it releasing just days before Robert Pattinson‘s full Dior ad seems like it’s not a coincidence.

Kristen’s ad for Balenciaga’s Florabotanica perfume shows her topless, with colorful flowers on her back. It’s definitely visually striking, much better than her last ad, and I’m sorry to say, much better than the images from Rob’s Dior ad.

Neither one of them seems to be emoting in the ads, but at least Kristen’s is aesthetically appealing. Although we have yet to see Rob’s full ad, the bits and pieces we’ve seen from it so far are largely underwhelming. Ok, so he’s posing with a half-naked woman – so what?! He looks so BORED in all the ads, and I guess that’s just a side effect of actors modeling – so many of them try their best to not be seen as pretty that they forget how to actually BE pretty when the time comes.

Rob has commented many times before that he hates being superficial about his looks, which will probably explain why he so often looks like a hobo. But at least with Kristen’s ad, they play to her strengths, which is open mouthed breathing and beautiful angles. Kristen’s one of the few people who actually looks good from a profile view, and the ad is actually beautiful.

Again, it seems a little suspicious that this would release so close to Rob’s ad, but maybe the dates were always set and it was just a coincidence. Sure, let’s just go with coincidence for now.