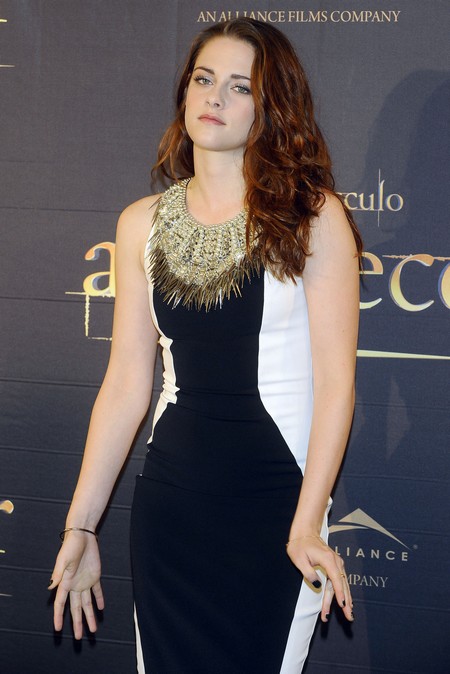 Twilight fans everywhere shed a tear when news broke in July that hot-mess Kristen Stewart had a fling with married – and father of two – Director Rupert Sanders. Several pictures of a hot make-out session between the actress and her “Snow White and the Huntsman” Director surfaced and spread like wildfire. After longtime flame and Twilight costar Robert Pattinson was adequately humiliated, Kristen went on the apology tour. She issued the public statement, “This momentary indiscretion has jeopardized the most important thing in my life, the person I love and respect the most, Rob. I love him, I love him, I’m so sorry.”

Sanders quickly followed suit with his own statement. “I am utterly distraught about the pain I have caused my family. My beautiful wife and heavenly children are all I have in this world. I love them with all my heart, I am praying that we can get through this together.” Gross. He is right about one thing. His wife is gorgeous!  And you pick Kristen Stewart as your side piece?! Mind blowing.

Even though Kristen and Rob started to rekindle their romance in October, things are far from perfect, Kristen maintains that she never slept with Sanders, but Rob is having trouble believing that. Let’s face it. Bitch got caught. She knows she is way out of her league with Rob, and will do anything to keep him- including purchasing a $2.2 million home a mile away from him a month after the scandal went public. Rob quickly answered this overture by putting his house-and former love nest with Stewart- on the market.

But it seems that Pattinson is willing to try and keep the past in the past and move forward with Stewart. Stewart, according to a close friend, even involved Rob’s family in an effort to win him back. Whether the intent is sincere, or an effort to make the press tour the couple is stuck on a little less awkward, Kristen is professing her remorse. “There are good days and bad days. She still feels guilty,” says a close friend.

Kristen is well aware of the affect this scandal has had on the public, especially Twi-hards. A production insider said, “She still thinks the world hates her. It’s hard to resume a relationship after something like that.” Can people change?  Sure – if they want to. While Kristen is eating plenty of humble pie, perhaps Donald Trump (closet Twi-hard?) tweeted it best, “Robert Pattinson should not take back Kristen Stewart. She cheated on him like a dog & will do it again–just watch. He can do much better!”