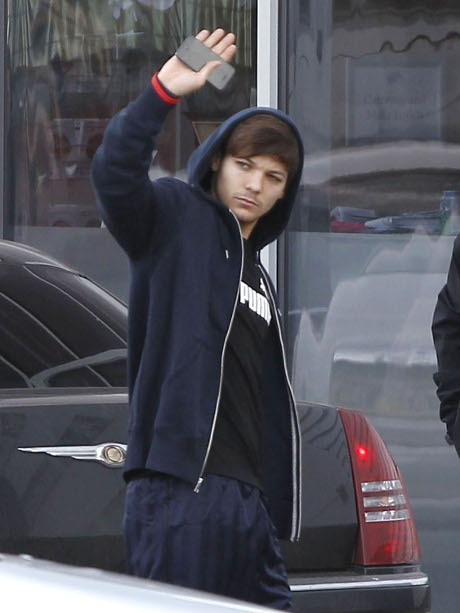 The Wanted and One Direction are the two reigning boybands of this generation, but they can’t seem to play nice with each other. We can’t even trace the origin of their feud, but we do know that it’s been going on for a couple of years now. And the Wanted’s latest barb comes in the form of a thinly veiled comment about a One Direction member’s sexuality.

The Wanted were promoting their new reality TV show on ‘Watch What Happens Live’ and they were asked which member of One Direction will come out of the closet first. Max George immediately replied ‘Louis [Tomlinson]’.

It seems to be that whether or not Louis is gay, this whole feud has become extremely childish and immature. That being said, the Wanted is coming off worse here, mainly because of Max. After ‘outing’ Louis, Max consequently revealed that his celebrity crush is Lindsay Lohan. I’m sorry, but when your celebrity crush is the Cracken, that really doesn’t say anything good about you.

Either way, Louis has been dating girlfriend Eleanor Calder for some time now. There were a lot of rumors about him being gay last year, which he vehemently denied. Usually, when a celebrity takes that much time and effort to deny he’s gay, there’s something going on. In One Direction’s case, all the boys have always been extremely friendly with each other and it really just seems like The Wanted is stirring up trouble again.

What do you guys think? Is Louis Tomlinson really gay? Is his relationship with Eleanor Calder just a front? Or is the Wanted just making trouble to further this ridiculous ‘feud’? Usually, both bands keep their feud to long Twitter fights, but they’ve started shit-talking each other in interviews recently as well. Let us know what you think in the comments.