Mark Wahlberg Steroid Use Obvious In Pain And Gain – Is He Lying About How He Got Buff? 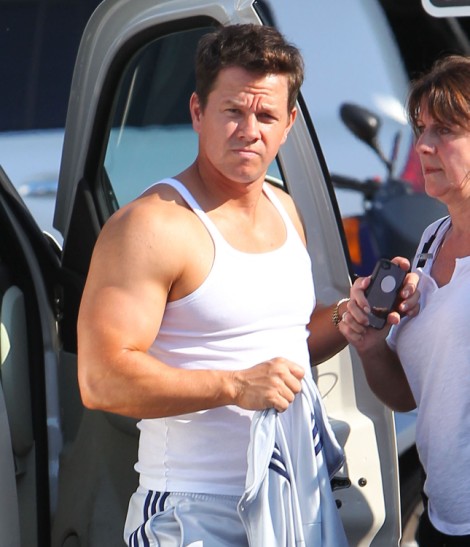 Was Mark Wahlberg adding a little juice to his protein smoothies to pack on the pounds for his new movie with Dwayne Johnson, Pain and Gain? Some are saying the lofty claims that he put on forty pounds of muscle in a mere 2 months to get into character as a meat head bodybuilder are too unbelievable and that he must have been including anabolic steroids into his workouts to gain that type of quick result.

Check out the photos of him on set last year below. Ugh,  gross. I’m so not a fan of that kind of bulk especially on short guys like him but Mark is nothing if not the little overachiever. He worked out like crazy to get into “believable” shape to make The Fighter too. I don’t know about stuff like this. Is a 40-pound muscle gain in two months over the top? It seems like it but I have no idea. His people have already come out denying the story saying he “took it as a personal challenge to get to the size he is at now and has been training non-stop.” He also credits MARKED Protein products for helping him add the bulk. Naturally, he developed the products and is busy hawking them out in conjunction with selling the movie.

He’s slimmed back down again thank God but his smaller physique is only calling the steroid use into question again. Personally I could care less if he did it but if he juiced and is saying the muscle is all from working out and using MARKED then that’s pretty shady. This could be a shame on me moment but I tend to think Mark’s a stand up guy. He seems like he plays it pretty straight generally but who knows with these types. We all know he has a pretty big ego and the fact that he had to share time with The Rock probably didn’t help his confidence. Being around Johnson’s massive thigh muscles could drive many men to steroids!

Are the Mark Wahlberg/steroid claims justified or did he just work out to attain that kind of crazy fitness?