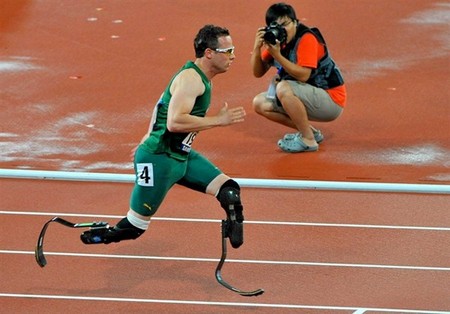 Oscar Pistorius is reportedly not in good shape. And that worries his circle of friends. If he still has any left. He’s apparently a “broken man” and “on the verge of suicide,” according to one of his friends. He’s also forced to sell off his belongings to fund his defense against a murder charge. He’s racking up a huge legal bill. And his endorsements are not paying a penny, not a shocker since companies like Nike dropped him. Nike doesn’t need another athlete to tarnish its image! They have other scandalous stars to worry about. Athletes always seem to be untouchable until they are accused of a crime. Are extra marital affairs a crime? No? Maybe they should be? Once accusations start flying around. Sports stars try their hardest to bring themselves down from the untouchable status.

But the second they are thrust into the spotlight. Skeletons break out of the closet thanks to their checkered past. That’s when the real image comes out. And boy, does Oscar have a temperamental past. He certainly made some “enemies” on his way up to fame. Those “enemies” say he likes to threaten people with bodily injuries. Yikes! Bully much?

Now we learn that Oscar (the REAL grouch) is attempting to flee South Africa and has had his lawyers appeal the condition of his bail which keep him firmly stuck on his native soil.  Can you imagine this murderous fiend globetrotting?  Many consider it a travesty of justice that he was granted bail in the first place.   Now the bastard wants to travel???

Well, in case you were under a rock when the news broke on Valentine’s Day, the so-called “Blade Runner” is accused of murdering his superhot and super sweet model girlfriend Reeva Steenkamp. He allegedly shot her with his gun. He mistakenly thought she was an intruder hiding in his bathroom. Is that what really happened Oscar?

The 26-year old sports star is currently out on bail and killing time at his uncle’s multimillion dollar mansion in Pretoria, South Africa. Under the terms of his bail, he doesn’t have to visit cops twice a week. So now, police will pay him a visit at his uncle’s mansion instead. How tough life is for Oscar! But he will have to stand before a judge again on June 4.